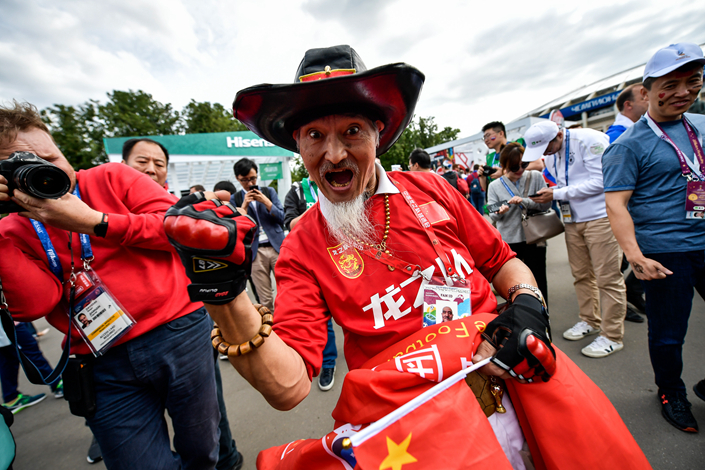 A member of the Chinese Football Fans Association poses outside the Luzhniki Stadium in Moscow before a match between Russia and Saudi Arabia on Thursday. Photo: IC

While its national team failed to qualify for the FIFA World Cup that kicked off with the host nation, Russia, thrashing underdog Saudi Arabia 5-0 in Moscow on Wednesday night, China is nevertheless well-represented at the monthlong tournament.

Chinese fans will make up a significant chunk of the audience across the five venues where matches are being played, having snapped up more than 40,000 of the 2.4 million tickets that have been sold so far, according to FIFA.

Yet Chinese citizens will visit Russia for more than soccer, with online travel-services provider Ctrip expecting 100,000 tourists to travel to the country. There will be an influx of tourists at more-typical hot spots, such as Vladivostok, Irkutsk and Lake Baikal, according to travel website Mafengwo.

Chinese viewers will be able to spot nine star players from the domestic Chinese Super League competing on the global stage. Among them are Brazilian technical midfielder Renato Augusto, who normally plies his trade with Beijing Guoan. He and Argentinian sentinel Javier Mascherano, who plays for Hebei China Fortune, will fancy their chances of appearing in the final. Nigerian duo John Obi Mikel and Odion Ighalo also compete in China, at Changchun Yatai and Tianjin Teda respectively.

Among the biggest winners of the tournament are Chinese brands. With several longtime World Cup sponsors such as Sony Corp. and airline Emirates pulling out due to FIFA bribery scandals, seven Chinese companies laced up their boots to make substitute appearances. Chinese sponsors, including property giant Wanda Group, home appliance firm Hisense Electric Co. and China Mengniu Dairy Co. Ltd., are making their debut World Cup appearances, hoping to bring their products to a global market.

CCTV host Bai Yangsong summed up the situation: “Every Chinese will be at the World Cup in Russia, with the exception of the soccer team.”