How Rules for Migration and Land Use Hurt China’s Environment 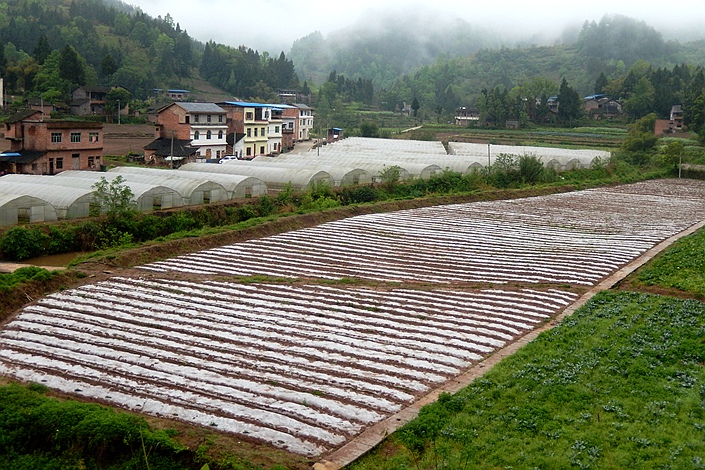 Farmland is seen in Yunyang county, Chongqing municipality, on May 29. Photo: IC

China’s land and migration policies are contributing to the country’s overuse of agricultural chemicals, a new study has found.

Policies that stretch back decades have caused China’s farms to shrink in size. And smaller farms are more likely to overuse dangerous chemicals because it is less cost-effective to invest in productivity-increasing equipment like machinery and irrigation systems than it is to resort to increased amounts of pesticide and fertilizer.

Smaller farms also tend to be run by people with less expertise, another factor leading to chemical overuse.

The research, published Monday, comes from a group of prestigious international universities led by Zhejiang University and Stanford University.

Chinese farmers’ dependence on agricultural chemicals has long been a cause of concern, with the deaths last year of 100 goats after they ate pesticide-laced spring onion leaves triggering public debate over how the country should tighten regulations on fertilizers and pesticides. Most of China’s millions of small farms depend on unregulated agricultural chemical producers, creating a major headache for authorities trying to clamp down on overuse.

But part of the solution, surprisingly, may be implementing reforms in the seemingly unrelated areas of migration and land policies, to increase the size of the average Chinese farm, the authors of Monday’s paper argued.

Although the average size of farms tends to increase in tandem with a country’s economic development, China’s farms lag behind the country’s status as the world’s second-largest economy due to a number of “policy distortions,” according to the researchers, whose paper was published in the Proceedings of the National Academy of Sciences of the United States of America. The average size of Chinese farms actually shrank between the 1980s and 2000s, a period of rapid economic growth in the country.

Researchers said the two main factors causing these “policy distortions” are the country’s household registration, or “hukou,” system, and its household contract responsibility system, which allocates land to rural households.

Under the hukou system, which distinguishes between urban and rural households and makes it difficult for rural migrants to obtain public services in cities, migrants are unable to fully integrate into cities and are therefore motivated to keep their rural land holdings as insurance. At the same time, the household contract system does not allow easy transfer of land between rural residents, resulting in fragmentation of farmland.

“Removing these distortions would decrease agricultural chemical use by 30% to 50% and the environmental impact of those chemicals by 50%,” the researchers said, after examining data from China and 74 other countries.

Additionally, larger farms in China could double the total income of farmers, the authors claim, because productivity tends to rise as farm size increases.

China has in recent years considered implementing major reforms to its land-use laws and the hukou system, with the central government promising in February that it will soon loosen restrictions on the use of land allotted to rural households.