By Taylor Folwell and Megan Baumbach 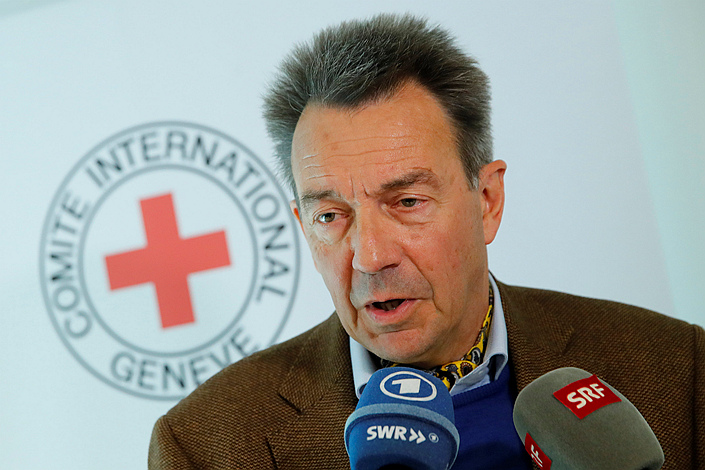 In Switzerland on March 19, International Committee of the Red Cross President Peter Maurer speaks to the media about his recent trip to Syria. Photo: VCG

Peter Maurer, president of the International Committee of the Red Cross (ICRC), recently visited Beijing and met with Chinese Vice President Wang Qishan, officials with the Ministry of Emergency Management, and the honorary president of the Red Cross Society of China. They discussed how to respond to the various humanitarian challenges connected to war and violence in the key countries of the Belt and Road Initiative in which the ICRC has activities.

The Red Cross Society and the ICRC have signed a memorandum of understanding that foresees ICRC’s support in Chinese Red Cross internal endeavors, including building further capacities in sharing international experience. Additionally, China will support the areas in which the ICRC is active.

Maurer expressed his wish to have an increased engagement with the private sector in China. The ICRC has recently been developing incentives such as the Humanitarian Impact Bond, a market instrument that raises money through investment in physical rehabilitation centers and public institutions, which pays back investors if the ICRC achieves certain objectives. He encourages China to utilize market-oriented tools such as these to engage in humanitarian objectives while also doing what is in their interest.

“We have certainly expressed our wish to have a more-structured and regular dialogue and engagement with the private sector in China,” Maurer said. “As I mentioned the other day as I spoke to the business people at the CCG (Center for China and Globalization), I think we have to reflect about the impact of investment and how exactly you do investment. … As Chinese companies become more important internationally, it is important they integrate those reflections into the investment decisions.”

The following is an excerpt from Caixin’s recent interview with Maurer in Beijing.

Caixin: Could you talk about the ways in which the ICRC and the Chinese business sector can cooperate?

Maurer: When I look at our business engagement, we have very different types of engagement. We have philanthropies supporting what we do, we have companies that engage on a corporate social responsibility. Some of them work on concrete projects with us, developing many grades for displaced populations so they have energy, developing programs for noncommunicable diseases. So you have different ways forward, and the ICRC itself has developed new tools and mechanisms for the private sector and business community and individuals. So, my point here with the Chinese companies was, think about those avenues and look what is in your interest and then do what is in your interest.

If I have one critical remark when I listen to conversations of Chinese businesspeople and the Chinese government, there is some linearity, as if investment will bring positive societal development and resolution of conflict. Our experience is less linear. We have to reflect about the impact of investment and how exactly you do investment. The first principle is to do no harm. I have said to the business people: The way you recruit, pay and offer social services to your staff can be either positive to a conflict environment or very negative. Conflict sensitivity is an important issue. As Chinese companies become more important internationally, it is important they integrate those reflections into their investment decisions.

What is the biggest challenge of cooperation between the ICRC and China in the Belt and Road countries?

Today, the biggest challenge is to find the right connecting points on where and how we can cooperate. This year’s conversation was focused on bringing the bureaucratic procedures together so that we have the best impact. The second (challenge) is contingent to ICRC’s work. We are a humanitarian organization, which has traditionally meant responding to short-term emergencies. At the same time, China has a vision of contributing to the development of other countries. So, the short-term and the long-term challenges have to be reconciled. This year the discussions were also about clarifying how we see our role as humanitarian agencies in the broader development context.

In which areas do you think ICRC and the Shanghai Cooperation Organization (SCO) can build deeper cooperation?

My understanding is that the SCO’s focus is fighting terrorism and extremism. I have proposed to the secretary-general of the SCO that this is a perspective for which the ICRC happily contributes. In Tashkent (in Uzbekistan) in October, we agreed that when there is a major event dealing with the challenges of extremism, the ICRC will make a contribution. Because of our international humanitarian law mandate and our policies, which are designed to reconcile societies and to prevent extremist developments, the ICRC has a positive contribution to make.

Will you please introduce some of the areas of cooperation between China and the ICRC within China, and any other plans in the near future?

The ICRC has developed certain methodologies to strengthen poor people or people affected by war and violence. Our experience in conflict has had a positive development with regard to poverty reduction programs in China. We certainly work together on the broad issue of missing people and family reunification. This is something which is important in China and internationally. As you know, the ICRC has entertained some of the largest databases of missing people worldwide and the Chinese Red Cross is representing an important part of the world. In that sense, they are an important contributor to a common effort, which is important for China, but is also important internationally.