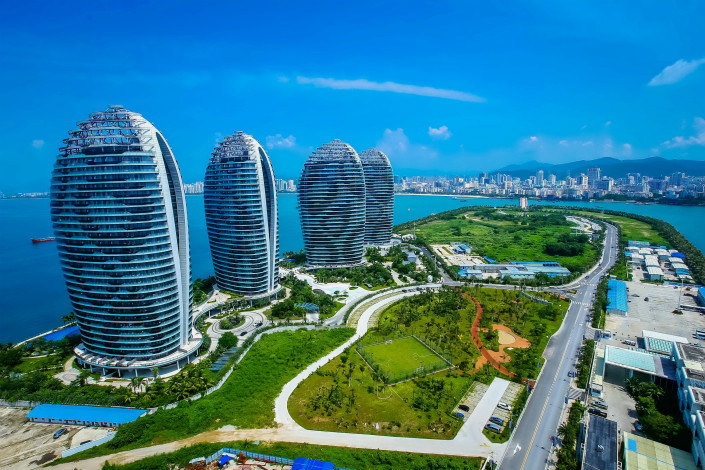 I arrived in Hainan in 1987. At the time, Deng Xiaoping had plans to push Hainan toward the international market and set up the first socialist free trade zone there. But by 1993, Deng’s plans had been pushed aside. In the late 1990s, Hainan became one of the country’s slowest-growing provinces.

At the turn of the millennium, there was talk of turning Hainan into an international tourism destination. By 2009, this had become a national-level strategy. The construction of international tourism infrastructure kick-started the development of Hainan’s tourism-focused modern services industry. But in practice, there were some contradictions between preferential policies and opening-up. In the past two years, Hainan has followed General Secretary Xi Jinping’s important 2013 remarks on Hainan, renewing the search for how to use the greatest level of opening-up to create a bigger special economic zone. Everyone believed the key was to construct a Hainan free trade port. On April 13, to my great excitement, Xi himself announced plans for a free trade zone and free trade port to be established in Hainan.

The development of the free trade area in Hainan is not for the benefit of the province alone. It is one of the central government’s important strategic policies.

Why is this so? Hainan has become an important focal point, as well as a challenge, in China’s security strategy and in the Belt and Road Initiative. Hainan is located on the northern edge of the South China Sea. If Hainan is transformed into an important strategic base of a pan-South China Sea economic cooperation circle, this will achieve what the central government has called for — transforming Hainan into an important gateway to the Indian Ocean and the Pacific. This is a major strategy.

At the moment, the most important thing is to create an internationalized commercial environment through making investment and trade easier and more convenient.

To begin with, Hainan should develop a customs system that is both liberalized and controlled, as soon as possible. At the moment, issues related to customs are being investigated and researched, and I believe solutions will soon be unveiled.

Hainan should also implement a self-registration system for enterprises as soon a possible. We are currently looking into whether Hainan can initiate an enterprise self-registration system similar to Hong Kong’s and Singapore’s, which will allow businesses to complete the procedures for registering as companies within a matter of hours. It should also make it simple for companies to deregister. If we achieve this, I believe more businesses will come to Hainan to register and invest.

Hainan should also encourage internationalized service providers to establish themselves in the province as soon as possible. PricewaterhouseCoopers has already signed an agreement with the Haikou city government, becoming the first well-known accounting firm to enter Hainan. I believed there will soon be droves of foreign-qualified law firms, accounting firms and consultancies arriving in the province. This will help lay the foundation for attracting foreign businesses.

At the same time, while building up Hainan as an international tourism consumption center, authorities must consider the following issues:

Can qualified businesses become duty-free shopping operators? Using Hong Kong as a benchmark, we should thoroughly conduct research to allow all businesses that meet the requirements to operate in the international tourism consumption center.

Will the general public of Hainan be able to enjoy duty-free policies? At the moment, as some residents of Hainan have pointed out, home prices have gone up, as have the prices of commodities, but their wages have not risen as much. I believe that allowing the whole island to enjoy the policies of the tourism consumption center is a way to place the people at the heart of policy.

Hainan should also accelerate the construction of basic infrastructure for the role of a home port for cruise ships. I predict that, with 59 nationalities now allowed to enter Hainan without a visa, the province will gradually expand visa-free entry to other nationalities, and that this policy will not take long to implement.

Some people ask if Hainan’s free trade zone and port have a future if they don’t focus on processing and manufacturing. The central government has established that Hainan should not focus on processing and manufacturing, but should rather focus on tourism, modern services, and high-tech industries. I believe that this will create a competitive investment and development environment for companies — one that meets the demands of economic globalization and industrial development.

Service industries are currently one of China’s weaknesses when it comes to opening up to the world. Last year, services accounted for nearly 24% of international trade globally, but in the first quarter of this year it accounted for only around 16% of China’s trade with other countries.

Additionally, negotiations over multilateral and bilateral trade are now focused on opening up the commercial services market.

Lastly, changes in the main contradictions of Chinese society, and changes in the consumption structure of the masses, are placing increasing pressure on the services trade. I was in Japan a few days ago, where I saw some large pharmacies catering specifically to Chinese tourists. A few days ago, Japanese diplomats visited Hainan to observe the situation, and my understanding is that they were observing the environment for developing health care partnerships there.

I believe that, in a few years’ time, Hainan will become an important base for the best health care and medical services in the country. In addition to developing the Hainan Boao Lecheng International Medical Tourism Pilot Zone, the province will also gradually loosen up medical policies across the island.