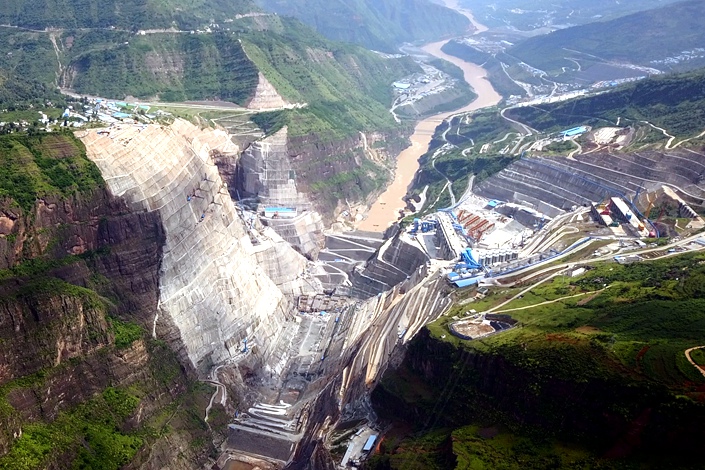 Construction on the Baihetan hydropower station on the Yangtze River in Liangshan prefecture, Sichuan province, is seen on July 27. Photo: VCG

Nearly a thousand small water-power projects have been built along China’s Yangtze river without the required environmental impact studies, a report released on Tuesday has found.

China’s National Audit Office compiled the report (link in Chinese) based on a four-month survey of the ecological and environmental conditions in the area. The region is an economic belt that runs along the river through 11 provincial-level areas, and accounts for more than one-fifth of the country’s total area.

More than 24,000 small dams were built by the end of last year, with some only 100 meters apart. They are so densely concentrated that at least 300 waterways in the area have intermittently dried up, the report said.

Water and air quality in the regions has improved somewhat along the belt, which is one of China’s most affluent areas. Levels of ammonia nitrogen, sulfur dioxide and nitrogen oxides all have fallen.

But pollution levels remain high due to insufficient anti-pollution infrastructure such as sewage plants and modern landfills, and also because of overdevelopment, according to the report.

Furthermore, regional governments have not shown the resolve to fix the problems, the audit office said.

The office also audited public financing for ecological and environmental protection in the area, and found extensive mismanagement. Nearly 1.3 billion yuan ($201 million) marked for tackling water pollution and desertification in eight of the regions has gone unused for at least a year.

About 26 million yuan designated for environmental protection went instead toward government administration expenses and other projects from December 2013 to January 2018, the study found.

The audit office does not have the authority to directly punish those suspected of violations, but can share its findings with other agencies for enforcement.

Nearly 100,000 cases of alleged environmental violations have been uncovered since 2016, and more than 4,000 have been handled by judicial authorities. Over 2,600 people were prosecuted or are under judicial investigation, according to the report.