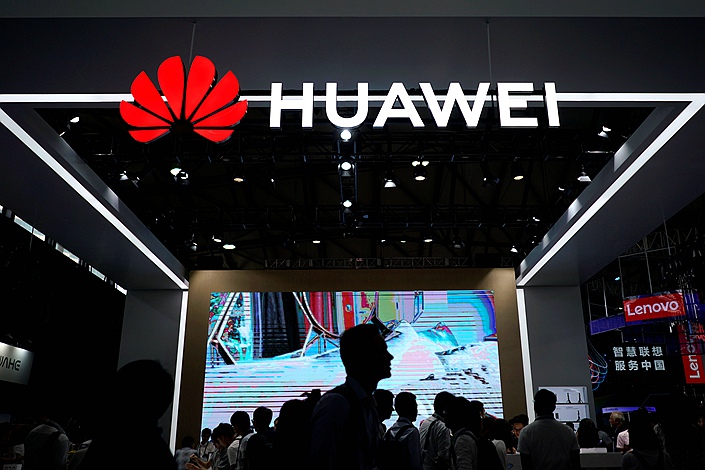 A Huawei sign is seen at the Consumer Electronics Show Asia in Shanghai on June 14. Photo: VCG

Huawei’s U.S. operations were dealt another blow this month when lawmakers urged Google LLC to stop partnering with the world’s third-largest smartphone-maker.

The Google-Huawei partnership was announced in January, under which Huawei will integrate Google’s instant-messaging app, Android Messages, into its smartphones.

“Chinese telecommunications companies, such as Huawei, have extensive ties with the Chinese Communist Party,” said the letter, dated Wednesday. It demands Google explain how it will mitigate “the grave risks of working with Huawei.”

Early this month, Facebook acknowledged that Huawei, Lenovo Group Ltd., Oppo Co. Ltd. and TCL Corp. — all Chinese companies — were among around 60 handset-makers that had been given access to its data in a “controlled” way. Facebook said it had granted smartphone firms access to users’ data before mobile apps became popular as a way of making its service work on a broad range of devices.

Huawei responded by saying that it has “never collected or stored Facebook user data.”

The letter came after the U.S. search giant refused to renew an artificial intelligence research partnership with the Department of Defense to help improve the accuracy of U.S. military targeting.

“While we regret that Google did not want to continue a long and fruitful tradition of collaboration between the military and technology companies, we are even more disappointed that Google apparently is more willing to support the Chinese Communist Party than the U.S. military,” the letter read.

In a statement to Caixin, Google said it looks forward to answering the lawmakers’ concerns.

“Like many U.S. companies, we have agreements with dozens of OEMs (original-equipment makers) around the world, including Huawei. We do not provide special access to Google user data as part of these agreements, and our agreements include privacy and security protections for user data,” Google said.

Founded by former People’s Liberation Army officer Ren Zhengfei, Huawei has long denied that it has links to the Chinese government as it grew into the world’s largest telecom-equipment maker and world’s No. 3 smartphone company — behind Samsung Electronics Co. Ltd. and Apple Inc.

“Every time the U.S. accuses China of threatening its national security, it reminds us of the same question: ‘What have U.S. companies done to affect China’s security?’” said a Wednesday commentary in the Global Times, a tabloid under the official People’s Daily.

Huawei has run into several problems in its attempt to capture more of the U.S. smartphone market in recent months, including its phones being dropped by retail chain Best Buy in March and April reports of the U.S. Department of Justice launching an investigation into the firm’s dealings with Iran.