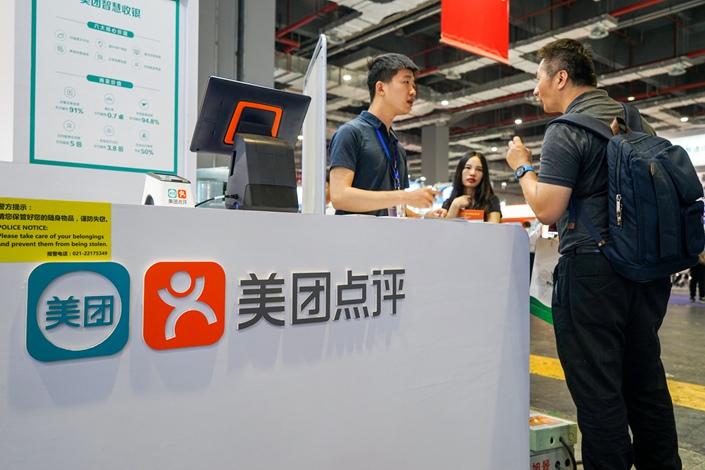 On-demand services provider Meituan-Dianping hosts a booth during an expo in Shanghai on May 14. Photo: VCG

(Beijing) — Meituan-Dianping, the world’s largest provider of on-demand services, revealed in its application for a Hong Kong listing that operating losses dropped sharply last year as it controlled expenses while nearly tripling its revenue.

The company, which offers services like restaurant reservations, travel, ticket-booking and food delivery, cut its operating loss to 3.8 billion yuan ($584 million) in 2017 from 6.3 billion yuan the previous year, according to a draft prospectus submitted to the Hong Kong Stock Exchange on Monday.

Total losses were 19 billion yuan last year, widening from 5.8 billion yuan in 2016, due to one-time items such as share-based compensation expenses and fair-value changes of convertible redeemable preferred shares, the prospectus said.

The internet company is turning to public markets to raise cash, as rival firms are pulling out all the stops in a capital-intensive battle for online spending.

In its prospectus, Meituan said it plans to use about 20% of the proceeds to “selectively pursue acquisitions or investments” that complement its business, while upgrading its technology and developing new products and services.

The prospectus didn’t disclose the listing price range or how much the company plans to raise, but Bloomberg News reported Meituan is targeting a $6 billion flotation at a valuation of about $60 billion.

Its debut will follow the initial public offering of smartphone-maker Xiaomi Corp., which is expected to raise as much as $6.1 billion in Hong Kong in early July.

Meituan is the world’s largest on-demand delivery network by number of deliveries, according to iResearch. In 2017, it completed about 2.9 billion deliveries with an average delivery time of 30 minutes.