By Wei Yiyang and Bonnie Cao 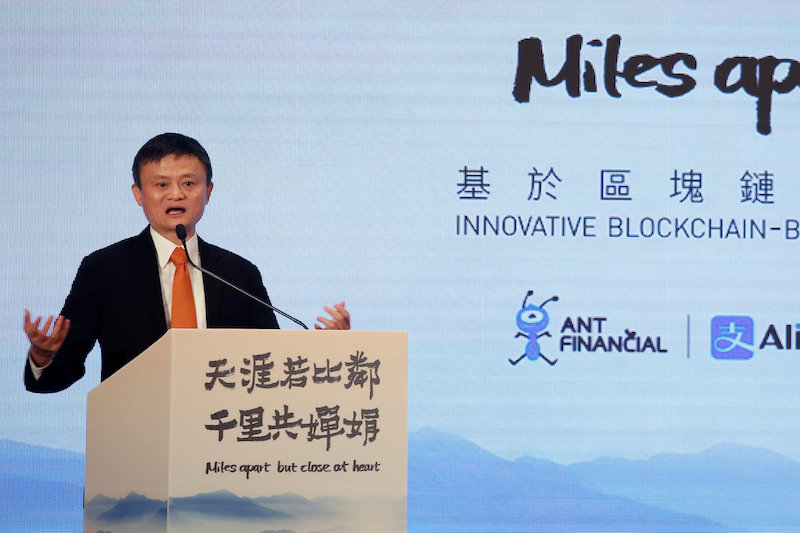 Powered by blockchain, a decentralized ledger and encryption technology, Ant Financial’s Hong Kong venture with conglomerate CK Hutchison Holdings can cut remittance costs significantly, said Ant Financial, which is backed by Chinese billionaire Jack Ma. The digital wallet service will be the first of its kind in the world, Ant said.

“This is probably my most important project in the past six months,” said Ma, the executive chairman of Alibaba Group. “It is a vision. With the blockchain technology, we will meet the financial services needs of everyone around the world in the lowest cost and fastest way.”

Hong Kong, home to about 200,000 Filipino workers and domestic helpers who send money home regularly, has demand for about $700 million of annual cross-border remittances, according to Ant Financial.

Although Ant didn't discuss the fee structure for its service, the costs are expected to be lower than with conventional remittances because fewer intermediaries will be involved. The technology also allows transactions to be completed in real time with greater transparency.

The blockchain encryption technology is most often associated with Bitcoin and other crypto-currencies, but it also has broader applications as a decentralized ledger to ensure secure transactions using conventional currencies.

“What’s holding us back is no longer the technology, but finding a better business model,” Jing said.

Ant Financial said this month that it had raised about $14 billion in new capital, driving the company’s valuation above $151 billion.

Hong Kong users of Ant Financial’s Alipay services will now be able to send money in real time to users of GCash, a mobile money service and wallet operated by the Filipino telecommunications company Globe Telecom. Transaction fees will be waived during the initial three-month trial period, Ant Financial said.

Ant Financial’s new service works with banking giant Standard Chartered, which acts as a settlement bank for the company and GCash for the blockchain transactions. With inflows of $33 billion in 2017, Hong Kong-to-the Philippines is the world’s third largest remittance market, according to Standard Chartered.

“Banks may exist in different forms in the future, but we are still necessary,” said Lisa Robins, global head of transaction banking at Standard Chartered, in response to questions from Caixin. “The new world is built on cooperation."

Jennifer Tan, CEO of Ant Financial’s Hong Kong venture, said the company is also in talks with mainland regulators in hopes of bringing the new service to users who seek to transfer money between the mainland and Hong Kong.