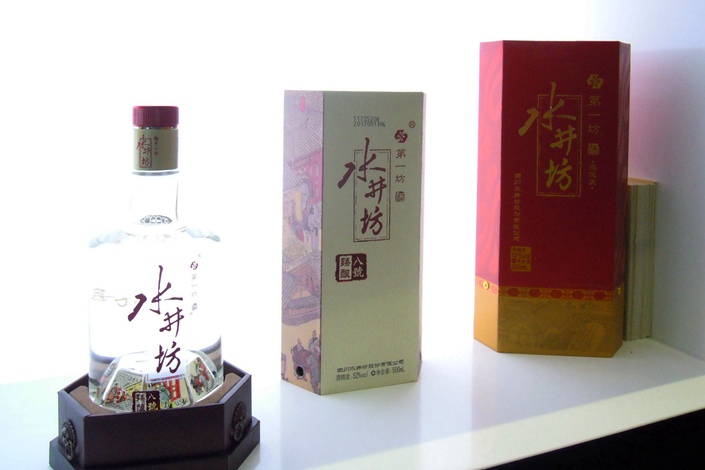 Bottles of Swellfun baijiu on display. After suffering losses in 2013 and 2014, the company returned to profits in 2015 and increased its profitability in subsequent years. Photo: VCG

British liquor giant Diageo PLC is considering boosting its stake in a Chinese baijiu-maker, at a time when the local spirits market is recovering.

Shares of the Diageo-owned Shanghai-listed Sichuan Swellfun Co. Ltd. surged to 55.62 yuan ($8.51) by the daily limit of 10% when the market opened on Tuesday, after the British company said it had offered to increase its stake to as much as 60% from 39.17% at an offer price of 62 yuan per share.

The total investment would be up to 6 billion yuan if the deal goes through. The transaction “doesn’t aim at delisting Swellfun,” the Chinese distiller said in a stock filing (link in Chinese).

The London-based maker of Johnnie Walker whisky and Smirnoff vodka secured a 39.17% stake in Swellfun in 2011, before the China liquor market began to slump.

Beijing launched its anti-graft campaign in 2012, targeting bribery and sending fears through the baijiu industry, as the liquor is a popular gift and social lubricant for deal-making. Swellfun was not spared, suffering losses in both 2013 and 2014.

Jim Rice, who was Swellfun CEO from 2013 to 2015, told Caixin that the three years he was with the company were “tough,” but that “the baijiu market is rebounding.”

“With growing health concerns, increasing income levels and changes in attitudes to consumption, Chinese consumers are starting to drink better-quality products, which has resulted in a higher volume growth in premium baijiu, and consequently has inflated average unit prices,” Zeng said.

Swellfun, which makes some of China’s highest-end baijiu, has launched new brands that target various levels of consumers in a bid to broaden its sales. The strategy helped the company see profits again in 2015, which it increased the following two years.

Diageo’s stake increase would also help it to have “a strong foothold in the world’s largest liquor market,” Rice said.