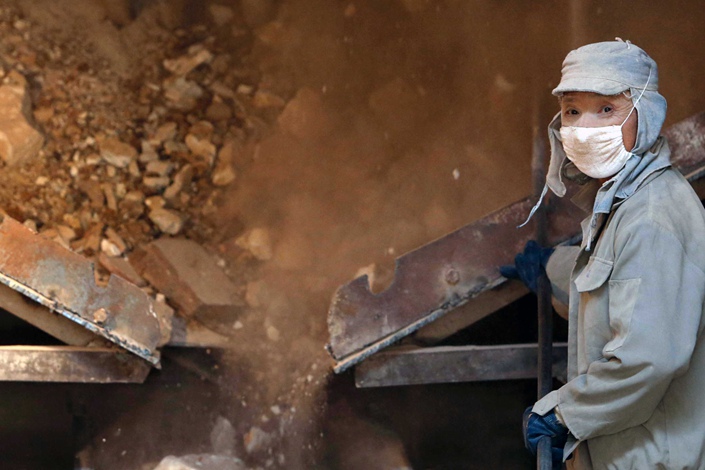 A worker wears a mask at a lime refinery in a mountainous part of Zhejiang province on Dec. 5, 2012. Photo: VCG

Police in southwestern China’s Guizhou province are suspected of colluding with local businesses after three doctors were detained for alleged medical insurance fraud.

The detention of the physicians, now on supervised release pending a trial, have stoked concerns that police may have been favoring powerful state-owned firms by stifling critics of the businesses.

Police in Zuiyi detained physician Huang Hengping in 2016 for allegedly providing workers with fraudulent black lung diagnoses, allowing them to gain access to payouts under a government-run medical insurance program.

Police said they were alerted to the scheme by a local company, the name of which was not released.

The payouts in question for 393 workers cost the medical insurance system 30 million yuan ($4.6 million), according to local police.

Black lung disease, known also as coal miner's pneumoconiosis, is caused by inhaling coal dust, and can lead to hardening of the lungs and impaired breathing.

The condition accounted for 85% of the 26,756 recorded cases of work-related illness in China last year, according to the National Health Commission.

Employees diagnosed with black lung disease are entitled to payouts under the government-backed medical insurance plan, as well as compensations from employers.

The investigation into Huang and two coworkers prompted provincial police and health authorities to clamp down on what they said were false-diagnosis scams.

But police failed to find evidence that there was collusion between the workers and the doctors, according to Shu Yongxia, Huang’s wife.

Police dropped the fraud charges against Huang and instead arrested him in November for dereliction of duty.

Prior to that, local police also arrested two people — Zhang Xiaobo and Dong Yourui — from the same hospital for the same irregularities linked to police allegations of fraudulent black-lung diagnoses.

The hospital, one of top medical facilities in Zuiyi, received more than 10,000 patients suspected of the disease from 2012 and 2016. But police only looked into medical records of some 1,350 of the suspected patients and 393 were found to show no symptoms of black lung disease.

That degree of overdiagnosis is normal in the industry, according to Deng Liqiang, head of the legal affairs department of the Chinese Medical Doctor Association.

Chang Zheng, the attorney for Zhang, said that the negligence charges against his client are unfounded because there is no evidence that Zhang flouted medical rules by giving his professional advice.