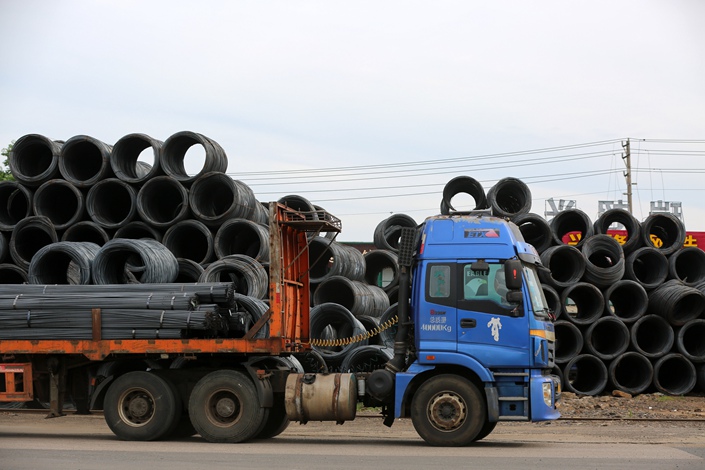 Steel is delivered to a market in Haikou, Hainan province, on Saturday. Photo: VCG

An e-commerce platform for the buying and selling of steel is set to have its shares publicly traded in Hong Kong, joining a slew of recent startups that are seeking funds from the city’s capital markets.

Shanghai-based Zhaogang.com, whose name literally means “looking for steel,” connects customers with steel manufacturers and related suppliers. The company filed an IPO prospectus to the Hong Kong Stock Exchange on Tuesday, but didn’t disclose the debut date nor how much it plans to raise.

“We firmly believe that in the current trillion-yuan steel industry, the time is ripe for the emergence of a massive e-commerce platform with a strong brand name, a national footprint, and integrated services and standardized product offerings,” said Wang Dong, the company’s founder and CEO.

Zhaogang claims to be China’s largest e-commerce platform for steel, with over 94,000 registered customers. The firm, founded in 2012, said it has established long-term relationships with more than 100 steel manufacturers, including major players such as Ansteel and Shougang Corp.

Zhaogang’s net profit rose 0.7% to 124 million yuan ($18.9 million) last year, while revenue doubled to 17 billion yuan, according to the prospectus. In 2017, the company recorded 63.9 billion yuan in GMV (gross merchandise volume), a measurement of retail sales.

Zhaogang’s rise has been helped by growing demand in the world’s largest steel market. Compared to the traditional steel-trading system, the e-commerce platform attempts to cut intermediaries between customers and suppliers, thus improving efficiency and reducing transaction costs.

The company operates mainly in China, but has expanded into six overseas markets, including South Korea, Vietnam, the United Arab Emirates, Myanmar and Tanzania.

Zhaogang’s upcoming float would be the latest in a series of Chinese internet services to tap Hong Kong’s capital market recently.