Jiuquan Sails for Jamaica With Plan for $3 Billion Alumina Plant

By Ke Dawei and Howard Liu 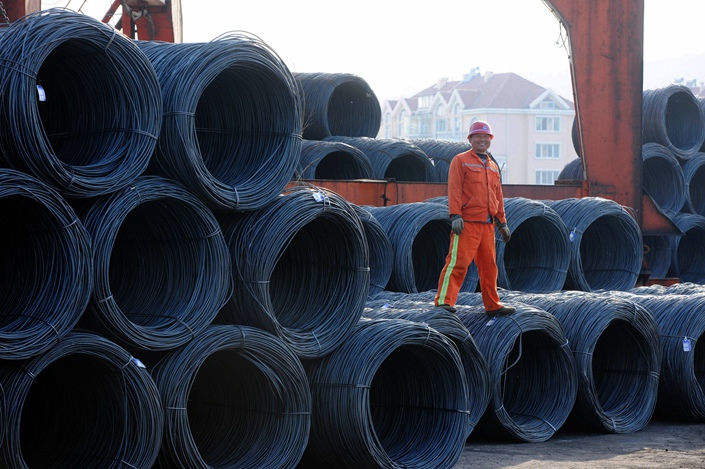 Steel sits at the port of Qingdao in East China’s Shandong province in May 2015. Photo: VCG

Jiuquan Iron & Steel (Group) Co. Ltd. has agreed to invest more than $3 billion in a new alumina refinery in Jamaica, the latest in a string of similar projects by outward-looking Chinese metals manufacturers trying to tap developing countries’ infrastructure needs.

The new project will be located in the Gansu Industrial Park and Special Economic Zone in St. Elizabeth Parish near an existing alumina refinery operated by local producer Alumina Partners of Jamaica, according to an announcement on the government-run Jamaica News Service website. Alumina is the main raw material used to make aluminum for construction and manufacturing.

Jiuquan will also build a liquefied natural gas plant to fuel the energy-intensive operation and will also develop a housing complex for workers at the site. The Jamaican government estimates the project could bring an additional 60,000 jobs to the region, with construction slated to begin by the end of the year.

Jiuquan is making the investment as Beijing encourages Chinese companies to take their infrastructure-building skills abroad as part of its Belt and Road Initiative, originally named for targeting such development in countries along the ancient land- and sea-based Silk Roads connecting China with Europe. Since announcing the initiative, Belt and Road has gone on to encompass a wider range of mostly developing countries throughout the world.

While Jamaica is not officially a member of Belt and Road, Prime Minister Andrew Holness has said he supports the Caribbean nation’s signing up to the initiative in the years ahead. The deal may also pave the way for future bilateral cooperation.

In a similar development closer to China, media in the Philippines reported that private Chinese steelmaker Panhua Group Co. Ltd. will build a $3 billion steel project in the major southern island of Mindanao. The plant will support the country’s domestic needs as it pushes forward with a $180 billion infrastructure campaign known as “Build, Build, Build,” which has become a signature initiative of President Rodrigo Duterte.

Development of “the long awaited basic industry will put a stop on our importation of steel and hasten our country’s industrialization,” Charito Plaza, director general of the Philippine Economic Zone Authority, was quoted as saying.

Chinese steel companies have increasingly turned to Southeast Asia for growth since Beijing began to focus on tackling overcapacity at home, according to Hu Yanping, chief analyst at consultancy Custeel. “Southeast Asia’s major push for infrastructure has given a new lease on life for an industry feeling the squeeze on the mainland,” Hu said.

U.S. punitive tariffs on Chinese steel and aluminum exports may have been a minor secondary consideration for Chinese companies increasing their operations abroad, given China’s relatively small trade with the U.S. for those commodities, Hu said. However, the increase in steel and aluminum supplies, at a time when there is already a global glut, may hurt commodity prices when the projects come online over the next few years, Hu said.