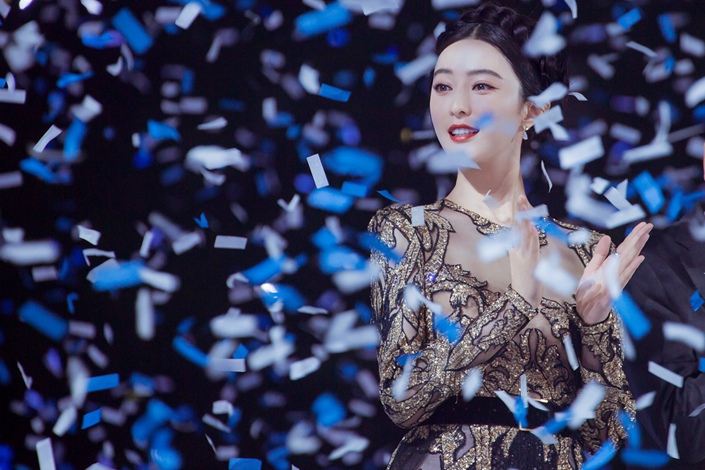 Chinese actress Fan Bingbing has been accused of receiving a multimillion-dollar hidden payment for starring in a movie. Fan has denied the charge. Photo: VCG

The Chinese government plans to impose restrictions on the pay of film and television stars as it grapples with a tax-evasion scandal that has rocked the entertainment industry and ensnared top actress Fan Bingbing.

The tax and film regulators on Thursday vowed to stop stars from evading taxes and to curb what they described as unreasonable rates of pay in the movie industry. They also took a swipe at the celebrity culture that has developed around China’s big screen, complaining that many films were “distorting social values” by “misleading the youth into blindly chasing after stars.”

The proposals have not yet been formally published, but the official Xinhua News Agency carried a report of the plans that was posted on the website of the State Administration of Taxation (SAT).

The article said that drawing up “yin and yang” contracts — in which a much smaller taxable sum is handed to the authorities — were pushing up production costs, and damaging quality and undermining the health of the country’s film and television industry.

It reminded the industry that film and television productions should prioritize “social benefits” rather than box office returns, and said it will look at how to correct the situation.

The rules have been issued jointly by the SAT, the Ministry of Culture and Tourism, the State Administration of Radio and Television, the China Film Bureau and the Central Propaganda Department, the Communist Party’s ideological watchdog, according to Xinhua.

The new rules limit the fees that stars can command for their onscreen work to 40% of total production costs, and stipulate that no single actor should command more than 70% of the total casting bill, Xinhua’s report said.

While it is not yet clear what other action the government will take against the film and TV industries, the notice said that government funds and charities who benefit from their tax exempt status will not be allowed to invest in movie and TV studios that “encourage excessive pay.”

The changes are being made in response to a scandal that erupted last month when popular former TV presenter Cui Yongyuan posted contracts on the Internet allegedly showing that high-profile actress Fan Bingbing had received a hidden payment of 50 million yuan ($7.57 million) for starring in a film in addition to her main taxable fee of 10 million yuan. The payment was detailed in a second contract, according to Cui, who is embroiled in a long-running row with renowned director Feng Xiaogang.

News of the shady tax dealings drew the ire of many netizens on Weibo, China’s Twitter-like social media platform, and the shares of several listed film studios tumbled. Huayi Brothers Media Corp., a major player which is working with Fan on a sequel to the smash comedy “Cell Phone,” saw its shares plunge by the 10% daily limit on June 4 to 7.36 yuan, wiping out 2.28 billion yuan of the company’s market value in a single day.

Tax authorities launched an investigation into Cui’s allegations and vowed to punish anyone found breaking the law.

The compensation package paid to a star actor can often take up half, or even more, of a film’s total budget, the founder of one studio told Caixin. “This inevitably squeezes other aspects of production, so a high budget doesn’t necessarily translate into a higher standard of movie.”

Blockbuster fees are standard fare in Hollywood – Arnold Schwarzenegger was reportedly paid $29.2 million to star in “Terminator 3: Rise of the Machines” back in 2003, while British actor Daniel Craig is set to pocket $25 million for his role in the next James Bond film, according to Variety, an entertainment magazine.

Yet while Hollywood actors’ paychecks have been largely stable in the last two decades thanks to the dominance of established studios, the rapid growth in China’s cinema market has spawned a new generation of studios that are prepared to spend big to secure top stars in order to establish themselves, according to Chinese-American Hollywood producer David U. Lee, who was an adviser to the China Film Group on the co-production of the 2010 remake of “The Karate Kid” starring Jackie Chan.

This article has been updated to clarify that “yin and yang” contracts are not all fake.