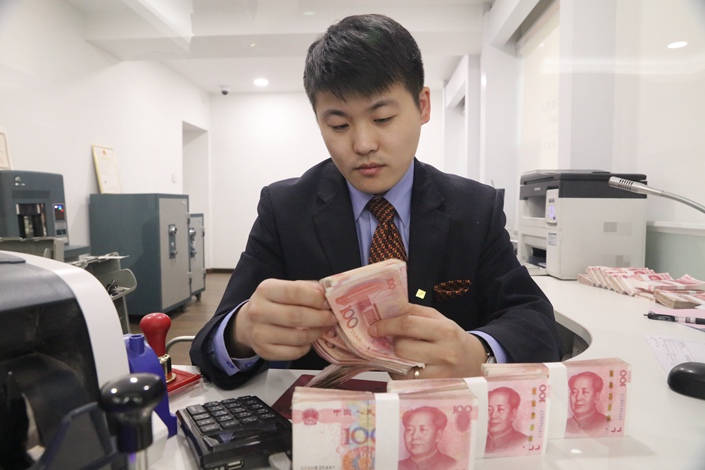 Keep the loans coming or we’ll report you for corruption.

Specifically, the officials threatened that the Changde government would report information about alleged misconduct at the banks to the local anti-corruption watchdog, Caixin has learned.

The threat, which the Changde government has denied, shows the lengths that local governments are willing to go to keep funds flowing to debt-burdened LGFVs — companies set up by local authorities to raise money primarily for infrastructure projects. The financial strain on LGFVs has grown since the national government began a campaign against illegal local government borrowing that has cut off many financing channels for these companies, raising the risk of defaults.

The stakes are high, considering how much money LGFVs owe. By the end of June 2017, the outstanding debt of LGFVs that have issued bonds reached an estimated 47 trillion yuan ($7.12 trillion), according to a study by the Chinese Academy of Fiscal Sciences and the Society of Public Finance of China, which are backed by the Ministry of Finance.

By comparison, China’s outstanding local government debt, which does not include off-the-books debt held by LGFVs, was 16.51 trillion yuan at the end of 2017, according to government data. That figure, equal to about 20% of China’s gross domestic product, accounted for more than half of the country’s total government debt.

The creditworthiness of LGFVs has long been backed by local governments, even though the central government forbids local governments from taking responsibility for repaying the debts of their LGFVs. A recent surge of bond defaults and a tightening of regulations on local government borrowing have reduced investors’ appetite for risk, making it harder for these companies to repay or refinance their debts.

At Friday’s meeting, several high-ranking city officials in Changde, which has the third-largest economy in Hunan province, told local banks that the city’s LGFVs will not repay any debts due this year if the banks refused to extend or renew the loans, according to minutes of the meeting circulated among financial institutions.

The officials also demanded that the banks lower the interest rates on LGFV loans to the benchmark rates set by the central bank, the minutes showed. In addition, they threatened government action against any bank reluctant to cooperate with the government on defusing debt risks, including reporting the issues to the local anti-graft agency.

The banks argued against the officials’ demands, an unnamed source with knowledge of the matter told Caixin.

On Wednesday, the Changde government released a statement on social media that said the information circulating about the meeting was inconsistent with the facts. However, it did not detail what the false information was.

An employee of an LGFV in the city told Caixin that city officials did make such demands at the meeting attended by local banks and LGFVs, but that doesn’t mean the officials planned to follow through with their threats.

A local bank employee said that Changde won’t rashly go through with the measures that the officials put forward at the meeting because the Changde city government and the Hunan provincial government still differ on how to handle the debt issue.

In its statement, the Changde government said it works to control government debt risks in accordance with the requirements of higher-level governments, adding that it did not, and will not, introduce any new measures on its own.

The city government also mentioned that it maintains good working relationships with financial institutions and has its government debt risks in check.