Another Online Lender Falls Under Investigation 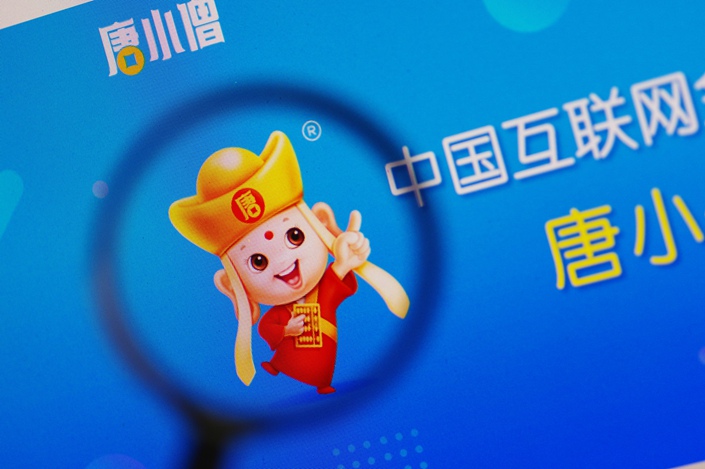 Another online peer-to-peer (P2P) lender has fallen under investigation on suspicion of illegal fundraising as the crackdown continues on China’s scandal-plagued internet finance industry.

Police told investors on Thursday that Zibang Financial was suspected of “illegally raising funds from the public,” a phrase that in recent years often refers to activities that resemble a Ponzi scheme. Police also said that the company’s actual controller, Wu Zaiping, was still at large.

Investigators have put more manpower on the case to speed up the accounting of the platform’s assets, promising to limit investor losses as best they can, Caixin learned from an internal meeting between five investor representatives and the Pudong New Area Public Security Bureau in Shanghai.

Tangxiaoseng’s case involves at least 2.88 billion yuan ($434.9 million) as of May 4, according to a report the platform filed to the local financial regulator. However, the case might end up involving a larger sum because Tangxiaoseng consistently hid data from regulators, an unnamed source told Caixin.

Staff from Tangxiaoseng told Caixin that their salaries haven’t been paid since April.

Tangxiaoseng is just the latest example of a fall of an Internet finance player that raked in funds from mom-and-pop investors by offering returns much higher than bank deposits. The rise of China’s internet finance industry sparked the explosive, yet unregulated, growth in fundraising from individual investors. However, authorities have cracked down on the industry since 2015 as cases of fraud surged.

Since the campaign, the number of operating P2P platforms has fallen from more than 3,383 at its peak in January 2016 to 1,883 at the end of March, according to data compiled by Wangdaizhijia. Some closed because they failed to meet the regulatory requirements, while others have encountered liquidity or insolvency problems due to a growing pile of bad loans.

Tangxiaoseng, meaning “little Monk Tang,” is a reference to an admired Buddhist historical figure. Like many of its peers, the platform came under scrutiny during the earlier crackdown on online lending. But rather than get out of the industry entirely, Tangxiaoseng began several years of jumping from one area of internet finance to another, leaving each business whenever regulators grew too interested.

In an October statement, Tangxiaoseng promised to stop pooling money from investors and providing online transactions. It announced it would transform itself into an asset management platform that would primarily be in the business of guiding customers to invest on local financial asset exchanges. In March, regulators tightened restrictions on P2P platforms in the asset management business, so Tangxiaoseng announced it would terminate its dealings with a local financial exchange.

Investors have tended to be too trusting of online wealth management platforms, sources close to regulators said, as some of them, including Tangxiaoseng, sought to bolster their credibility by exaggerating or lying about their connections, particularly to the government.

In January 2017, parent company Zibang Financial announced it had completed a strategic restructuring with technology service provider Ruibao Liyuan Group. At a news conference, Ruibao’s chairman at the time touted the company’s affiliation to a state-owned enterprise under direct control of the central government. Three months later, however, police arrested Liu in the southern city of Haikou, Hainan province, on suspicion of running an online pyramid scheme.

The once-high tide of Internet finance has ebbed, industry insiders told Caixin. Several analysts tracking the industry said more Ponzi-scheme scandals are expected to emerge in the near future as the regulatory crackdown deepens.