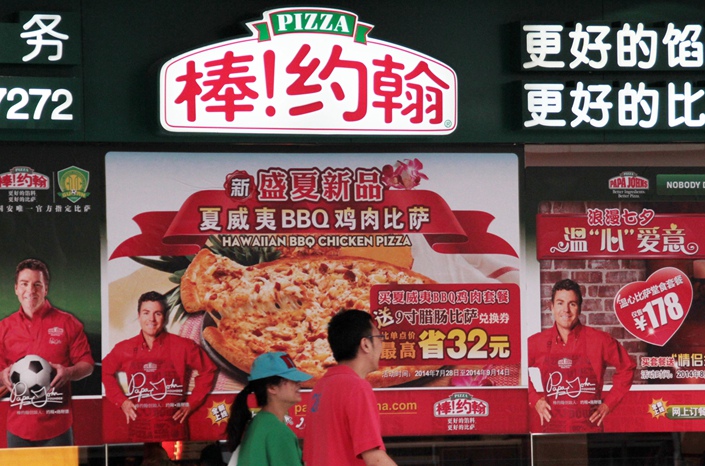 Pedestrians walk past a Papa John’s advertisement in Beijing in August 2014. Photo: VCG

Papa John’s said that all 34 locations in Beijing and Tianjin have been sold to Asia Gourmet Holdings (Shanghai) Co. Ltd., which operates the popular Beijing-based Korean food chain Zheng Yi Wei in China.

The financial details of the transaction weren’t disclosed.

“It’s taken well longer than what we ever anticipated it to take,” company CEO Steve Ritchie said during an earnings call in May, referring to the deal.

Rumors of Papa John’s selling its North China stores surfaced in 2015. At that time, the chain had nearly 60 restaurants in the region.

The company is still running more than 150 locations in other Chinese cities including Shanghai and Shenzhen.

Facing rising competition, Papa John’s said its global restaurant sales declined 1% year-on-year in the first quarter, excluding the impact of foreign exchange fluctuations, while a year before the figure rose 5.5%.

Papa John’s was unable to challenge Pizza Hut’s domination of fast-food pizza in China for two main reasons: it hasn’t invested heavily in marketing, nor has it succeeded in making its pizzas stand out, Huang said.

Huang said that Pizza Hut often refreshes its menu with seasonal themes, such as a Caribbean concept for the release of a “Pirates of the Caribbean” movie. Both brands make American-style pizza with a thick base, but Papa John’s has failed to impress customers, Huang said, adding that Papa John’s fresh, handmade dough should have had an advantage over the pre-made bases used at Pizza Hut outlets.

However, holding onto a dominant position in the market is no easy task even for Pizza Hut, Huang said, adding that more and more operators, either chains such as Domino’s, Saizeriya and Pizza Marzano or independent pizzerias, have already cut into Pizza Hut’s market share.