By Peng Yanfeng and Leng Cheng 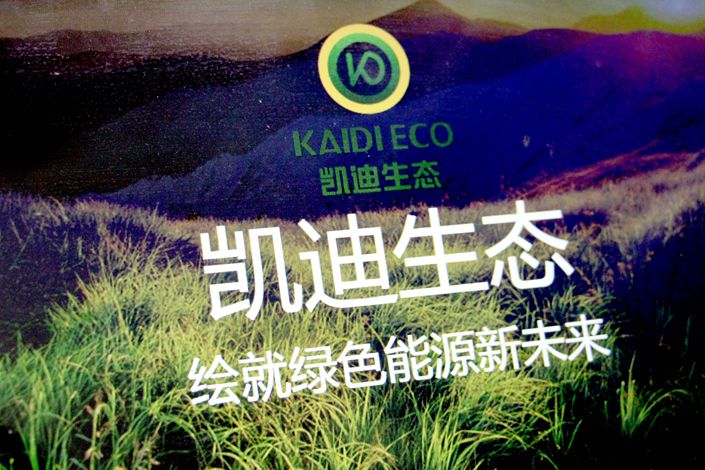 The unfolding debt crisis of one of China’s biggest biomass electricity producers has left it on the cusp of delisting, piling liquidity pressure on a company reeling from a nearly 700 million yuan ($105.7 million) bond default.

The Shenzhen Stock Exchange on Monday warned Kaidi Ecological and Environmental Technology Co. Ltd., a listed subsidiary of the new-energy company Sunshine Kaidi New Energy Group Co. Ltd., that the company was at risk of being delisted after its auditor refused to sign off on its financial statement on Friday.

After the warning, Kaidi Eco’s shares slid by the 5% daily limit in Shenzhen on Monday, the first day the stock had traded since the company suspended trading of its shares nearly eight months ago. It is common for Chinese mainland companies to suspend trading of their shares after an event like a default or corporate scandal to prevent the stock price from collapsing.

The delisting warning is just the latest blow to Kaidi Eco, which announced in May that it had missed a payment on a 698 million yuan bond, the sixth-largest default so far this year among Chinese companies.

Kaidi Eco released its 2017 annual report on Friday, after delaying its release for more than two months. In the report, which the company’s auditor refused to sign off on, Kaidi Eco reported a net loss of 2.38 billion yuan, compared with a net profit of 333.5 million yuan in 2016.

Kaidi Eco described 2017 “as the toughest year in company history.” It blamed its debt problems on the fact that it expanded far too quickly just before the country began to curtail credit in a deleveraging campaign.

In 2015, the company went on an asset acquisition spree, purchasing 154 companies from its parent Sunshine Kaidi for 6.85 billion yuan. Of the 87 biomass power plants it purchased, only 18 are still operating. And most of them are running at a loss, Caixin has learned.

Seeking rescue funds, Sunshine Kaidi has been in negotiations to sell its controlling stake in Kaidi Eco to China Orient Asset Management Co. Ltd., one of China’s four major bad-loan managers. However, the negotiations hit a wall after Sunshine Kaidi demanded that China Orient first pony up several billion yuan to bail it out of its own financial problems, Caixin has learned.

Kaidi Eco’s problems have attracted the attention of the local government of the central city of Wuhan, where Kaidi Eco’s headquarters is located. Sources told Caixin that Cao Guangjing, deputy governor of Hubei province, has led several meetings to discuss how to solve the problem. Several officials from the China Banking and Insurance Regulatory Commission were also involved.

The company has promised to liquidate some of its assets to repay a portion of its existing debts, roll over the debt, or carry out debt-to-equity swaps to relieve the liquidity pressure.

Adding to Kaidi Eco’s problems was the resignation of its Chairman Li Linzhi, who advocated selling assets off in a package during the latest round of negotiations.

A separate filing on Sunday said Li stepped down because of “personal reasons,” without elaborating.

Sources told Caixin that there will be more personnel changes unless there is a breakthrough in the negotiations.