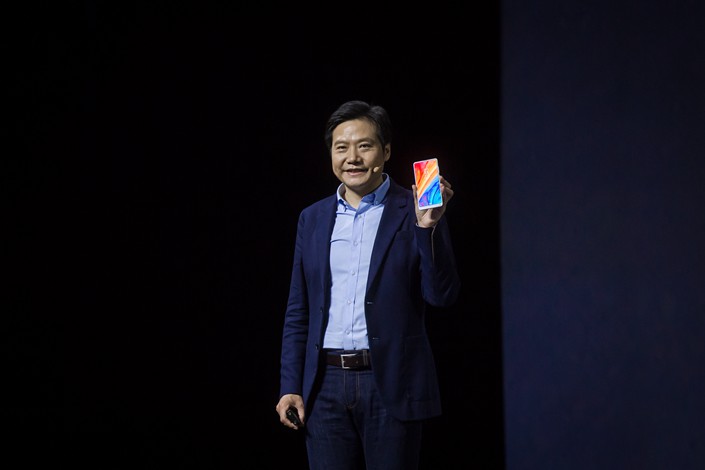 When Lei Jun was a freshman at Wuhan University in 1988, he read a book on Silicon Valley and how it had nurtured many leading high-tech entrepreneurs, including Apple Inc. co-founder Steve Jobs.

The current CEO of Xiaomi Corp., which aspires to become the Apple of China, was so impressed that he couldn’t sleep for several nights and had to walk around campus just to calm his excitement. Lei is likely feeling similar butterflies in his stomach this week, as his company on Monday will debut shares in Hong Kong in one of the world’s largest high-tech initial public offerings (IPOs) in years, despite a tepid reception from investors.

“I thought to myself that I wanted to be a great man” like Jobs, Lei recalled of his early impressions of Apple and Jobs during a talk in Taipei in 2015. Then 46, Lei made those remarks the same year he was named as one of the world’s “100 Most Influential People” by Time magazine, alongside Apple CEO Tim Cook. A year earlier, he had been named Forbes Asia’s Businessman of The Year.

Fast-forward three years to the eve of Xiaomi’s $4.7 billion IPO, with the company now boasting a presence in 74 countries and regions, from Thailand to France. It ranks as the world’s fourth-largest smartphone brand, behind only well-established giants Samsung Electronics Co. Ltd. and Apple, as well as Chinese rival Huawei Technologies Co. Ltd.

Smartphones aside, Lei has also staked his reputation on trying to build something bigger, with promises of creating a “Mi ecosystem,” offering a wide array of “smart” lifestyle products with everything from robot cleaners to air purifiers, water boilers, sport shoes and even suitcases.

Forbes puts Lei’s current net worth at an estimated $12.5 billion, making him the 11th-richest man in China and 118th in the world. Taking into account his holdings of 31.4% in Xiaomi, 13% of software-maker Kingsoft, and 13% of social networking operator YY Inc., the IPO could catapult his net worth to a new high, according to media reports.

Few could have imagined such a fortune when Lei started his studies at Wuhan University, located in the capital of his home province of Hubei. After completing all of the credits for his computer science bachelor’s degree in just two years, Lei spent his senior year starting a small venture with two fellow students selling expansion cards improving a PC’s ability to process Chinese text.

After graduating in 1991, he went to Beijing, then emerging as China’s high-tech capital, and landed his first job as an early employee at gaming software startup Kingsoft Corp. Ltd. He quickly climbed the corporate ladder and became CEO in 1998 at just 29. He would go on to take the company public in Hong Kong in 2007.

But just two months after that IPO, Lei abruptly resigned from Kingsoft. A source told Caixin he was burnt out on running the company, which had made four failed attempts at a listing before finally succeeding. From Kingsoft Lei turned to angel investing, offering both funds and advice to other young entrepreneurs.

His investments during that period included online book seller Joyo.com, which was bought by Amazon.com in 2004 as one of the U.S. e-commerce giant’s earliest investments in Asia. He also invested in YY Inc., a gaming and social networking operator that listed in New York in 2012, and rejoined Kingsoft as chairman in 2011.

A major turning point for Lei came in 2009, when he turned 40. He recalled waking up in the middle of one night with jitters just like the ones felt before big exams. The thought of “becoming a great man” had returned, he recalled in the talk in Taipei. “Do I still remember my dream of building a world-class company? And how far would I go to realize those dreams again?” he thought to himself.

Liu Qin, a co-founder of Morningside Venture Capital and a close friend, recalled asking Lei at that time: “You are loaded now with money and fame. Are you sure you want to take another plunge?”

Lei decided that was indeed what he wanted, and assembled a seven-man team consisting of two former workers from Google Inc., a former developer from Motorola Mobility LLC and an academic, to co-launch Xiaomi on April 6, 2010.

Before launching the company’s first phone, Lei had to find a chip supplier to power his new devices. “Armed with nothing but just an idea,” he called on U.S. chip giant Qualcomm Inc. and made a “passionate two-hour presentation” that convinced the company to sell its chips to Xiaomi, then-Qualcomm Greater China President Wang Xiang told the South China Morning Post in an earlier interview.

Wang would go on to quit Qualcomm and join Xiaomi himself as a senior vice president in 2015.

Xiaomi’s products quickly caught on in its early days, thanks in no small part to Lei’s savvy strategy of using an online-only sales model and “hunger marketing” campaigns that created artificial product shortages. But Xiaomi’s early days also brought controversy as the company was accused of copying Apple products. In a famous exchange in high-tech circles, Apple chief designer Jonathan Ive slammed Xiaomi’s products in 2014 as a form of “theft” and called the company “lazy.”

Under Lei’s direction, Xiaomi responded that it was a “huge fan of Apple” and its Chinese designers were inspired by Apple innovations. “Such accusation is actually a kind of prejudice against Chinese companies,” a Xiaomi official later told Bloomberg, adding that people refused to believe that a Chinese company could become a world-class innovator and develop such high-quality products.

Another embarrassing moment came in 2015, when Lei opened a global launch event for Xiaomi’s smartphones in India by saying “I’m very happy to be in China.” A clip of those comments quickly went viral, prompting some to mock his English, as he repeatedly asked the audience “Are you OK? Are you OK?”

The talkative Lei responded on his microblog, which boasts about 17 million followers, that he was on stage to “entertain the participants with his English,” and didn’t realize the clip had gone viral in China.

But after his early success, Lei went into a period of relative quiet as Xiaomi plunged from grace beginning in 2015, shortly after a funding round that valued the young firm at an eye-popping $45 billion.

A series of missteps after that caused Xiaomi to drop from the echelons of the world’s top smartphone-makers, as its sales tumbled to just 53 million units in 2016 from 71 million at the height of its early success the previous year.

Lei himself would attribute the stumble to overreliance on the online-only sales model, while others would also blame mediocre products that couldn’t live up to earlier hype. The company also made other missteps in its global expansion, despite its early success in India where it is now the leading brand.

“We have more work to do,”Lei wrote on his microblog in August last year, reflecting on its past failures. “We must be grounded, humble and ready to start all over from scratch. The path to success will be ours if we strengthen the fundamentals.”

As it heads into its IPO with new momentum following a period of retrenchment, Lei is once again facing a healthy dose of skepticism about his company’s valuation. While some had previously said Xiaomi could be worth as much as $100 billion, final pricing of the company’s shares last week has placed the figure at a far more modest $54 billion.

Its shares were drawing bids as much as 10% below their IPO price in the gray market, Caixin learned on Friday, pointing to lukewarm investor interest and casting uncertainty over the company’s trading debut on Monday.

Lei appears to be unfazed by the hurdles ahead.

“There is no other phone-maker in the world that is able to turnaround after seeing its sales slide,” Lei said. “None but Xiaomi.”