Foreigners May Get OK to Trade China’s Rocky Stocks 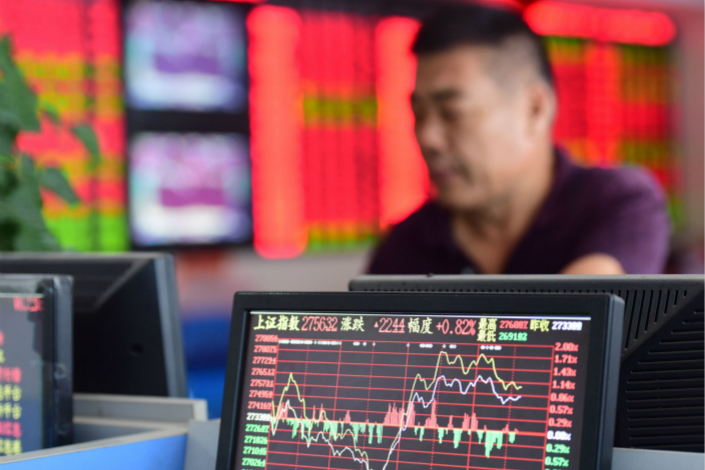 A securities business is seen in Fuyang, Anhui province, on Friday. Photo: IC

* The draft of rules is open to public feedback until Aug. 8

(Beijing) — Thousands of foreigners working in China will soon be able to enjoy the roller coaster ride of the country’s equity markets as regulators consider opening trading to individuals of other nationalities.

As part of the government’s strategy to open its financial markets and attract more overseas capital, the China Securities Regulatory Commission (CSRC) is proposing to broaden access to the yuan-denominated A-share market to foreigners who work in the country and those who work overseas for an A-share listed company that offers stock options and other equity-based incentives.

A draft of the rules was published by the commission on Sunday following approval for the initiative from the State Council, China’s cabinet, and will be open to public feedback until Aug. 8, the CSRC said on its website. It didn’t give a date for when the final green light will be given.

More than 900,000 foreigners were employed on the Chinese mainland in 2016, according to the official English-language China Daily newspaper. The number of local employees working for Chinese companies abroad rose to more than 1.3 million in 2016, according to the paper, a figure that includes those employed by nonlisted companies and those without equity incentives.

The proposal comes as China’s equity markets are hitting a rough patch. Shanghai and Shenzhen, two of the world’s top 10 stock exchanges in terms of market capitalization, were among the worst performing in the second quarter of 2018, slumping by 14.7% and 10.1% respectively, and pushing them into the grip of a bear market. There has been some recovery in the last few days, however, with the benchmark Shanghai Composite Index rising 2.47% on Monday while the Shenzhen Component Index, which includes many of country’s midcap technology companies, adding 2.8%.

A Chinese depositary receipt (CDR) pilot program, designed to lure overseas-listed tech giants to trade their equity on the A-share market, is also proving less popular than anticipated. CDRs are tradable certificates issued by Chinese banks that represent shares listed on foreign markets. But the enthusiasm of companies like Xiaomi Corp., Baidu Inc. and Alibaba Group Holding Ltd. seems to have cooled as companies struggled to reach an agreement with regulators about how they should be priced under existing market rules.

The CSRC’s announcement is the latest in a series of measures taken by the government over the last several years to attract more foreign money into the country’s capital markets after fund outflows stabilized following two years of massive capital flight.

The government has resumed giving quotas under several controlled programs for institutions, including the Qualified Foreign Institutional Investor plan. Two stock connect programs now link the Hong Kong stock market with those in Shanghai and Shenzhen, and on May 1, the government quadrupled the cap on how much investors in Hong Kong could invest in mainland stocks through the links each day.

A major milestone was marked on June 1 when MSCI Co. finally added 226 A-share stocks to its benchmark Emerging Markets Index. The index is tracked by money managers with $1.6 trillion in assets, according to MSCI. Currently, Chinese stocks have an aggregate weight of 0.39% of the index, and the CSRC is keen to increase this.

Currently, three categories of foreigners can directly invest in the A-share market, according to the CSRC notice: those with permanent residence permits; those working in China for A-share listed companies with equity incentives, who are allowed to hold shares only in the company they work for; and those who set up a company listed domestically, who can only hold shares in their own company.

The number of permanent resident permit holders is small, however — only 662 applications were accepted in 2017 and 1,800 between January and April this year, according to the State Administration of Foreign Experts Affairs.

The CSRC is proposing eligibility criteria as part of the new regulations: foreigners must hold citizenship of a country that has set up a regulatory partnership with the commission. According to its website, the CSRC has signed over 68 memorandums of understanding with foreign securities regulators, including those of the U.S., Japan, the U.K, and Germany.