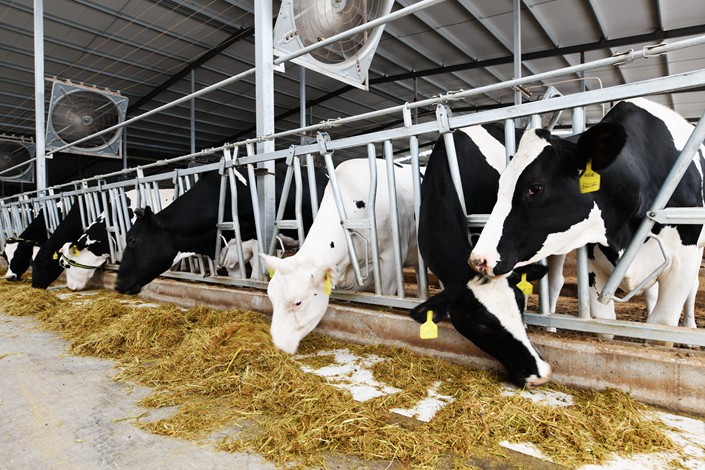 Cows are fed at a dairy farm in East China’s Jiangsu province on June 22. Photo: VCG

Raw milk is milk that has not yet been processed for safe human consumption, either in liquid form or the form of a half-processed powder that can be reconstituted into a liquid.

The average price dairy companies paid producers for raw milk in China declined to 3.38 yuan (51 U.S. cents) per kilogram (2.2 pounds) by the end of June, the lowest since December 2012, according to the latest data from the Ministry of Agriculture and Rural Affairs.

This price is below Chinese dairy farmers’ average production cost of around 3.4 yuan per kilogram, said Zhu Danpeng, a food-and-beverage industry analyst with the China Brand Research Institute. In contrast, raw milk worldwide was sold by producers at 2.1 yuan per kilogram in December, according to data from the International Farm Comparison Network, as cited by the Dairy Association of China.

Zhu said that dairy farmers have been suffering “serious losses” because they use outdated technology that produces low-quality milk, so dairy companies are not willing to pay high prices.

Li said that even after the Guangzhou government ordered companies not to reject the local supply, they would cite various reasons to break deals, such as excess bacteria or a peculiar taste.

In 2015, the Chinese government inked a free-trade agreement with Australia that would phase out dairy tariffs in four to 11 years, which has been a boon to Australian exporters that had been hit by tariffs as high as 20%. An earlier Sino-New Zealand free trade deal in 2008 allowed dairy imports from New Zealand to be tariff-free by 2019.

The amount of raw milk imported by China from all countries has nearly doubled since 2012, totaling 5.6 million metric tons (6.1 million short tons) in the first quarter of the year, according to a monthly report by the China Cow Industry Technology Research System. Most of the imports came from New Zealand, Australia and the U.S.

U.S. imports may decline soon, as a 25% tariff has been slapped on them as part of the ongoing Sino-U.S. trade war.

China’s dependence on imported raw milk has increased over the past years. Imported raw milk amounted to 27.8% of the ratio between imports and domestic production in 2016, up from 22.7% four years earlier, according to Caixin calculations based on data from the Ministry of Agriculture and Rural Affairs, and the Dairy Association of China.

China Modern Dairy Holdings Ltd., the top raw milk producer in China, faced growing losses in 2016 and 2017, of 785 million yuan and 995 million yuan respectively after having reported profits for the previous years.

In order to improve the dairy farming industry, the State Council, China’s cabinet, in June issued a guideline stipulating that raw milk from domestic supplies account for at least 70% of the milk processed by Chinese dairy companies by 2020.