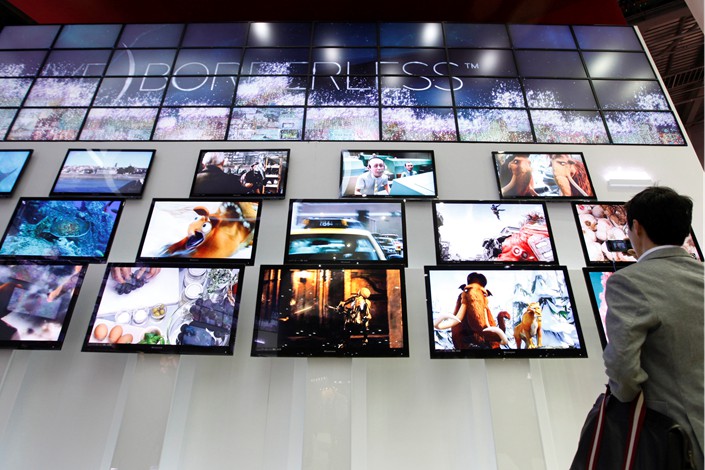 A display of LG televisions draws attention at an event in South Korea. Photo: VCG

* LG Display will control 70% of the joint venture, with the remainder owned by the local partner

LG Display is setting up a joint venture with the Guangzhou Economic and Technological Development District to churn out organic light-emitting diode (OLED) displays, a more energy-saving and bendable generation of panels versus the current liquid crystal displays (LCDs). The district is a designated national economic development zone.

LG Display will control a 70% stake in the joint venture, with the remainder owned by the local partner, according to a company statement issued Tuesday.

LG Display had announced such a plan in July 2017, but Seoul gave the green light only in December, on the condition that the electronics giant be allowed to keep its advanced technology secret and ensure that hiring decisions remain in South Korea’s national interest.

LG Display is the world’s top LCD-maker for televisions, and manufactures nearly all large OLED screens for televisions globally. It is currently the only company capable of commercially producing large OLED panels, which are used in TVs and expected to eventually replace LCDs.

“China demand is critical to OLED televisions as they have been well-received in the U.S. and Europe,” said Eric Chiou, research vice president of WitsView Technology Corp., a panel tracker in Taipei. “Through the investment in Guangzhou, LG Display wants to reach out to more Chinese television brands to use its OLEDs.”

LG Display said the new so-called 8.5-generation OLED plant will be set to mass-produce panels in the second half of 2019. It will mainly produce large panels with an initial output of 60,000 per month, before ramping up to a maximum of 90,000 a month.