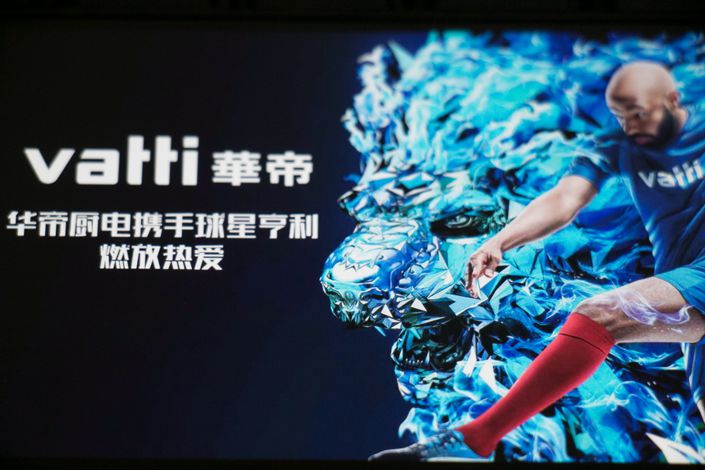 (Beijing) — Ahead of the much-anticipated 2018 FIFA World Cup final on Sunday, players from both the French and the Croatian teams are starting to get tense. But one Chinese company may be even more nervous than the trophy contenders.

Kitchen-appliance maker Vatti Corp. Ltd., together with its franchisees, may have to pay customer refunds of up to 79 million yuan ($11.8 million) if the French team, which the company sponsors, lifts the World Cup in victory.

Back in May, Vatti promised that anyone who bought a specific set of “championship products” in June would receive a full refund of the purchase price if France were to win the tournament. The full product set, which cost up to 4,999 yuan, included a gas stove and a ventilator. The company later extended the purchase deadline to receive the refund to July 3.

The normally low-profile company likely extended the deadline due to the amount of publicity its refund promise was generating during one of the world’s top sports tournaments. In China, the World Cup soccer tournament is widely followed even though the national team hasn’t qualified since 2002. And this year, Chinese companies have been unprecedentedly active during the competition after a corruption scandal at tournament organizer FIFA scared away some long-time foreign sponsors.

A day after the deadline, Vatti reported that its sales had surged during the promotion, adding that its brand awareness “has improved.” During the tournament-linked campaign, sales at off-line franchises grew 20% to 700 million yuan, with the gain including not only the “championship products” but also other goods like water heaters and sterilizers. Online sales growth was even better, climbing 30% to 300 million yuan.

The improvement in Vatti’s brand awareness appeared to be the company’s big win from its tournament bet, stimulating sales across its entire product range. The “championship products” that were eligible for the refund accounted for only 8% of total sales during the period, according to the data published by Vatti.

The company said that the cost of the special refund campaign would be “controllable,” in part because it is sharing that cost. The Guangdong-based company stipulated ahead of the tournament that all refund costs for products purchased at off-line outlets would be covered by franchisees. Vatti itself would be responsible only for online-purchase refunds, which represent about 37% of total refund costs.

However, some Vatti franchisees were already experiencing financial difficulties before the potential cost of the refund campaign. On June 29, near the end of the World Cup campaign, a Guangdong province court seized assets from its Beijing and Tianjin distributors after the legal representative behind both franchises disappeared for more than 10 days.

That information sent shares of Shenzhen-listed Vatti down by the daily limit of 10% on July 2, the next trading day, and the share price continued to decline over the most of the next two weeks, before rising 4.5% in trading last Friday.

Vatti explained later that it had asked the court to seize the assets after it realized the franchises might experience cash-flow troubles. The Beijing and Tianjin franchises benefited from a previous agreement with Vatti that allowed them to obtain their supplies at lower costs, but Vatti canceled the discount in 2017.

Vatti said that all the sales, marketing and after-sale services at the Beijing and Tianjin franchises are operating normally, as the asset seizure didn’t cover the distributors’ bank accounts.