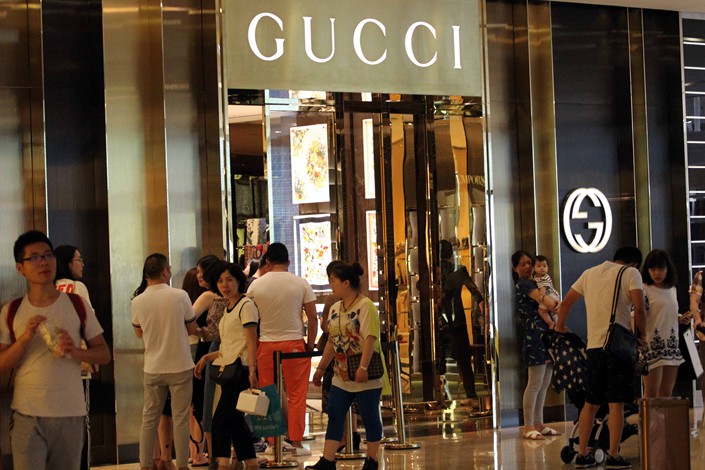 * Louis Vuitton was first luxury-goods maker to lower prices, on June 29, followed by Hermes and Gucci in early July

* Moves follow a decision in late May by the State Council to cut tariffs on consumer goods to stabilize imports amid the ongoing China-U.S. trade war

(Beijing) — Luxury brands, including Louis Vuitton and Gucci, have cut retail prices in China, following Beijing’s recent move to trim consumer-good tariffs. But the impact of the cuts will be limited as there remains a big gap in the prices of their products sold at home and abroad, analysts said.

Louis Vuitton was the first known luxury purveyor to lower prices, starting June 29, according to a company statement sent to Caixin, adding that such efforts will continue.

Hermes’ and Gucci’s price cuts on certain products in China went into effect in early July, according to company statements to Caixin. None of the brands, which rarely offer discounts, have disclosed by how much they slashed prices.

The moves follow a decision in late May by the State Council, the country’s cabinet, to cut tariffs on consumer goods to stabilize imports amid the ongoing China-U.S. trade war. As of July 1, the average duty on shoes and apparel fell to 7.1% from 15.9%, and the tariffs on leather bags dropped to less than 10% from as much as 20%, according to the official announcement.

“There will be some positive impact, but it won’t be very significant given that a big price gap remains after the reduction,” said Luan Lan, an associate partner at McKinsey & Co. in Shanghai who follows the luxury market.

Tariffs on imports account for only 0.5% to 7% of the products’ retail prices, according to Shanghai Customs, which cited a survey by the Ministry of Finance. In comparison, the VAT can be as high as 17% and the consumption tax on perfume, for example, is 30%.

Chinese luxury-buyers have grown more sensitive to prices in recent years, Luan said. Five years ago, 60% of luxury consumers would tolerate a 20% price gap. But now only 20% buyers are willing to do so.

Global luxury brands have constantly promised to shrink the price gap and take steps such as opening online stores on e-commerce sites to better cater to the Chinese luxury market, which McKinsey estimated will become the world’s largest by 2025, with a share of 45%.