By Ye Zhanqi and Clara Spars 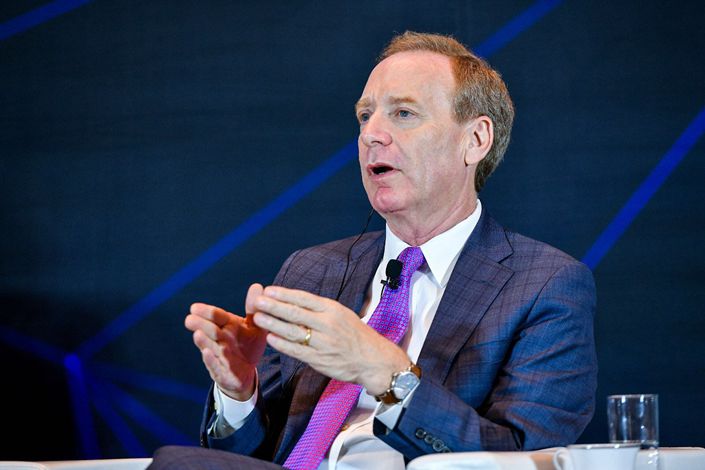 Microsoft Corp. President Brad Smith says his company’s strategy for artficial intelligence is “to popularize it, to make it accessible to everyone, to make it easy for people to use, to make it affordable.” Photo: Microsoft

It may best be known for its operating systems and office software, but Microsoft Corp. is placing its future bets in the loftier realm of cloud services and artificial intelligence (AI) that will power a future generation of smart and portable products.

Since entering China two decades ago, the U.S. software giant has formed partnerships with about 17,000 local companies and was even named one of the 10 most innovative companies in China in the 2015 edition of a list compiled by Fast Company magazine.

Microsoft’s cloud dreams hinge on its Azure service, which it operates in China with local partner 21Vianet Group Inc. Following the original launch of their partnership in 2014, the pair’s business has posted triple-digit growth in each of the last four years, 21Vianet said earlier this year.

During his visit to China last week, Microsoft President and Chief Legal Officer Brad Smith sat down with Caixin to discuss the technological climate in China, as well as Microsoft’s ambitions to expand into the domains of AI and cloud computing services. The following are excerpts from that interview.

Caixin: How often do you come to China?

Smith: I try to get here at least once a year. But in some years, I come more than once. Some years, I’ve been here many times. So I always enjoy coming.

What brings you here this time?

This time, it’s a variety of different events and activities. In part, it’s been a great opportunity to learn from how technologies have been used in the recent past in China, to how it’s being used in the future; it’s also an opportunity to meet with the Microsoft team here in China. Our fiscal year just ended, so it’s the time of the year where we all come together. I will also be in Hong Kong, where there is a large technology conference called “RISE.”

What are your opinions on the Chinese market, as it relates to Microsoft?

China is connected to the world in a much more expansive and even deeper way than was the case five or 10 or certainly 15 years ago. I think that there are many exciting things that the world can learn from China, and I think that it’s exciting to think about the role that China can play and sharing that with the world.

And at the same time, I think there are opportunities for new forms of collaboration. Certainly at Microsoft, we want to contribute to the success of every country, including China, including the United States. And many days, that really brings us into opportunities to collaborate much more closely, whether it’s with the private or public or nonprofit sectors here in China. So it’s a new world, and I think there’s a new generation in China that recognizes how much that new world has to offer.

We live in a time where a vast number of companies are investing in AI. What does AI mean to Microsoft at this point in time?

Microsoft’s fundamental Al strategy is to democratize AI — that’s one of the phrases we use. We really mean to popularize it, to make it accessible to everyone, to make it easy for people to use, to make it affordable. But one of the very specific approaches we are taking is to take AI not as a single monolith, but as a series of pieces.

I think what it fundamentally means is every service becomes a cloud service; it doesn’t mean, again, that everybody has to choose that. I think our belief in customers’ choice stands in the space as well. So if people want to keep some of their data on their premises, they want to keep it on their server, we have traditional client-server solutions; we even created new cloud solutions that can be applied on-premise in this way.

Our cloud service is called Azure, while we have a variant from this called Azure Stack. So if there’s a company or part of the government that doesn’t want to store data on the cloud, they can buy the server from us. We constantly operate technology with the latest features in Azure, but the data never leaves their premises in their control.

But actually, where most customers are going is to use the storage in the cloud. It’s cheaper, it’s more secure, it’s more resilient. Whenever we have a region for Azure, we have two data centers. So your data is stored in one place and backed up in another. These two centers are usually a couple of hundreds of kilometers apart. So, if there’s a flood or hurricane, one area is less likely to affect the other.

The cloud is tremendously beneficial in that we can constantly operate the service. We really moved away by large from a world where you will get new software every year or two. By now, new features are being added to our services more on a weekly or monthly basis. So we constantly give customers the best technology, and in a way that’s so much more affordable than days where customers have to go buy their own hardware, maintain their own server room in the lab.

What are Microsoft’s biggest challenges ahead with regard to AI and cloud computing?

I think we’re going to see AI and the cloud as the defining technological trend for probably the next three to five years, and then we’ll start talking about something else, and I’m not here today to say, “Oh, and I know what it is!” I think that it could be any variety of different things.

I actually think the bigger challenge that we’re going to face across the tech sector is really this headlong collision between where technology is going and where the geopolitics of the world are heading. We are living in a time when there are more tensions between countries, when it’s harder to be globally trusted when you have national borders being regarded the way they are.

You know, I think that is in some ways, you know, one of the real challenges that we need to continue to navigate. I think we need to go out every day and prove to people that it doesn’t matter whether you’re in China or the United States or Europe or in South America. You know, we are a company that you can trust. We are a company that is actually focused on thinking concrete steps to promote local economic growth.