Microsoft, Exxon on Board as Bloomberg Launches New-Economy Forum 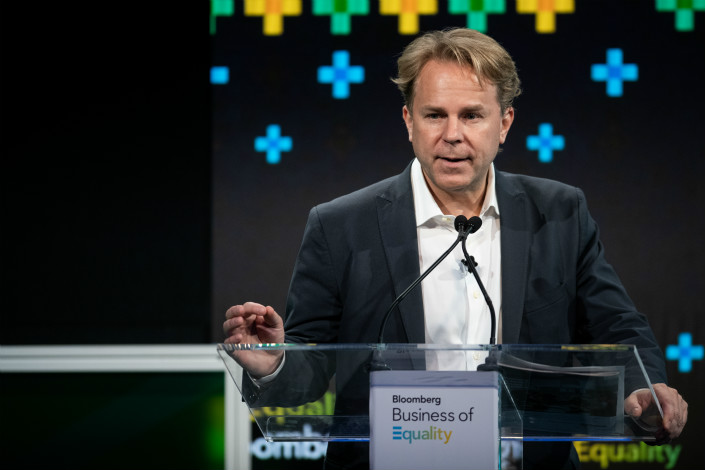 Justin Smith, CEO of Bloomberg Media, speaks during the Bloomberg Business of Equality conference in New York on May 8. Photo: VCG

Financial news and information provider Bloomberg LP will stage a new-economy forum hosted by major CEOs in China this fall, representing the main initiative for its consumer arm in a media market that is at once filled with potential but also tricky due to tight government oversight.

At the same time, Bloomberg Media CEO Justin Smith also told Caixin in an interview that China’s wildly popular WeChat social networking service could provide a model that Western media might try to copy in their search for business models capable of challenging the current dominance of Google and Facebook.

The Bloomberg-backed New Economy Forum is set to stage its first edition on Nov. 6-8 in Beijing, and will feature attendance by top executives from a list of 11 founding partners that includes Microsoft, ExxonMobil, FedEx, Mastercard and HSBC. The event will also include developing market participation, represented by founding partners like Nigerian conglomerate Dangote Group, the Public Investment Fund of Saudi Arabia, and the Abu Dhabi National Oil Co., Smith told Caixin in an interview this week at Bloomberg’s Beijing office.

The forum has been in the planning stages for the last three years, and only recently received approval from the government, he said.

“It’s the most ambitious new event platform that we’ve ever launched,” he said. “It is founded on a relatively straightforward idea, which is that the world is going through this historic transition from a Western or U.S.-led global economic order to something new, which is going to involve a lot more influence from emerging countries like China, India and parts of Asia, the Middle East, Africa. A whole new set of players are emerging with much louder voices on the global stage, much more influence, much more authority than in the past.”

No Chinese names were among the forum’s 11 founding partners, though its advisory board includes former central bank chief Zhou Xiaochuan and Zeng Peiyan, former vice premier, who also heads Bloomberg’s Chinese partner for the project. But Smith added that organizers have begun to discuss attendance by Chinese thought leaders following the event’s recent approval, reflecting the important role that government plays in China’s economic realm.

“It’s a business within Bloomberg, a business with a far higher purpose than just making money,” Smith said. “A business designed to create conversations and actions around solving the world’s pressing issues. We thought by funding it with a series of founding partners, it would bring more committed people to the table,” he added, declining to provide more details on the event’s actual business model.

Since joining Bloomberg in 2013, Smith has been tasked with building up the company’s consumer business, which is separate from its core business of renting highly specialized terminals to big financial institutions. In December, the consumer division launched TicToc, a major new consumer-oriented video initiative, in partnership with social networking giant Twitter.

Smith said that initiative is now generating an “eight-figure” U.S.-dollar amount in annual revenues. He added that revenue for the division he heads rose about 7% in the first quarter, but said the figure should accelerate into the double-digit realm for the year as several new initiatives come on stream.

He noted the difficulty that all media are now facing, partly due to the huge advertising revenues eaten up by the duopoly of Facebook and Google. But he also pointed out that the online media realm is always changing, and noted that China’s wildly popular WeChat, which boasts around 1 billion active users, could provide a preview of what the next big global player could look like.

Unlike many major Western new media and online companies, WeChat combines a wide range of functions onto a single platform, including Facebook-like socializing features, Amazon’s e-commerce and WhatsApp’s instant messaging.

“It’s clear to me that if you’re Facebook or LinkedIn or Snapchat or whomever, that you’re looking at the WeChat model and saying that has to be something that they’re considering,” he said. “WeChat must have deeper engagement than even the biggest Western social media platforms due to the range of functionality.”