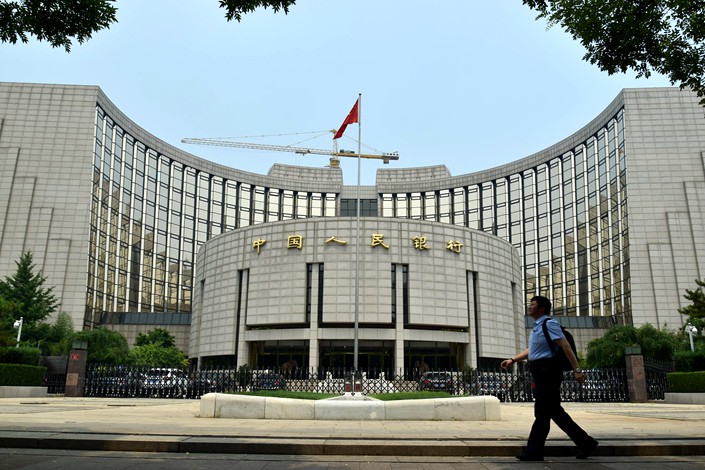 An article published by a media outlet linked to the People’s Bank of China, seen above, was removed from the internet after it questioned some of the country’s fiscal policies. Photo: VCG

China should increase fiscal spending and fine-tune its crackdown on off-balance-sheet banking activities to bolster weakening economic growth, a central bank-linked newspaper on Friday quoted analysts as saying, ratcheting up a rare public debate between policymakers.

In an article headlined “Monetary Policy Alone Can Hardly Cope With Credit Contraction, Fiscal and Regulation Policy Support Urgently Needed,” the Chinese-language Financial News lamented that liquidity in the economy has remained tight despite multiple monetary loosening efforts by the central bank this year.

The report was quickly taken down from the website of the newspaper, a publication that was created by the People’s Bank of China (PBOC) and major state-owned financial institutions in 1987. The comments mark a rare instance of differing opinions among top policymakers emerging in public, since most such debate is usually done behind closed doors.

China’s ongoing credit crunch has been linked to tightening financial regulation, which has made lenders increasingly cautious, and can’t be resolved simply through cash injections or lending quota expansions by the central bank, the report cited Chen Jianheng, a fixed income analyst with investment bank China International Capital Corp. (CICC), as saying. Chen thus called on fiscal policy to be more active and the deleveraging campaign to be fine-tuned to address the problem.

“Monetary stimulus alone cannot improve the situation where risk appetite shrinks in the face of draconian regulation,” Chen was quoted as saying.

The Chinese economy expanded 6.7% year-on-year in the second quarter. The growth rate has not been this low since the July-September quarter of 2016. Growth weakened as infrastructure spending slowed sharply amid stringent controls, many imposed by the Ministry of Finance, on opaque borrowing by local governments. Financial regulators’ efforts to rein in shadow banking and other off-balance-sheet lending activities have also limited funding for real estate developers and local government financing vehicles and undermined companies’ refinancing ability, leading bond defaults to spike. Escalating trade tensions with the U.S. have further complicated the prospects of China’s growth.

As growth has slowed, the central bank has taken easing steps to spur the economy. The PBOC has cut the amount of funds banks must keep in reserves three times this year and sought to encourage lending via cash injections through tools such as medium-term lending facility.

Despite those efforts, total social financing, a broad measure of credit in the economy, rose 9.1 trillion yuan ($1.3 trillion) in the first half of this year, 2.03 trillion less than the increase in the same period last year, data from the central bank showed. Year-on-year growth in M2, the broad measure of money in circulation, also hit a historic low of 8% at the end of June.

In what analysts said signaled an attempt by the central bank to press the finance ministry to shoulder more responsibility for pump-priming economic growth, the PBOC’s chief researcher last week criticized fiscal policy (link in Chinese) for being inadequate to support expansion, pointing to the fact that this year’s target of the budget’s deficit-to-GDP ratio was set lower than last year’s.

The comment was soon refuted by an official of the Ministry of Finance, who in an article (link in Chinese) published on Monday said that the budget deficit is not a precise way to measure fiscal policy and dismissed the researcher’s arguments as “unprofessional” and “biased.” The finance ministry itself, however, hasn’t publicly responded.

The Financial News on Friday noted that official figures showed national fiscal revenue rose 10.3% year-on-year in the first six months of the year, outpacing an increase of 7.8% in fiscal spending.

“There is still ample room for fiscal policy to play its role,” it quoted CITIC Securities analyst Ming Ming as saying.

CICC’s Chen suggested the government increase fiscal spending in the second half of the year to help boost profits of companies and cushion the impact of the drive to deleverage the economy, according to the report.

It cited the analysts as warning regulators of a negative impact on the economy of “overly drastic contraction” of off-balance-sheet lending businesses, while urging authorities to not impose “excessively harsh” rules to tighten WMPs to avoid further curbing banks’ risk appetite and exacerbating financing difficulties of small firms.