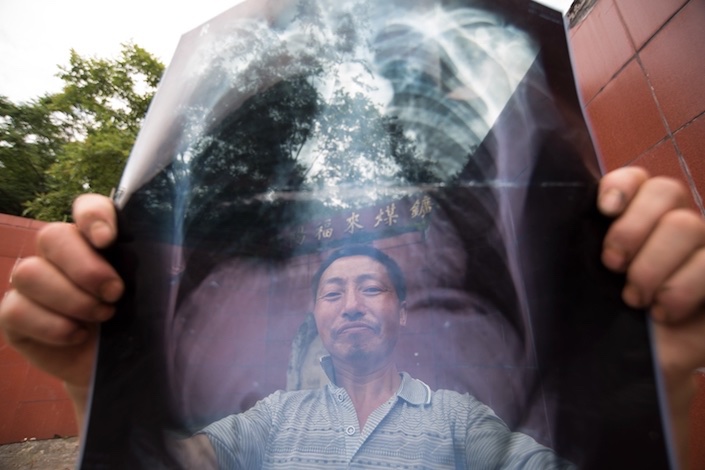 * Experts estimated that China currently has more than 6 million patients with black lung disease, the most in the world

The life of Dong Yourui was turned upside down in November when local police arrested her on charges of dereliction of duty.

The 46-year-old physician’s alleged crime was misdiagnosing hundreds of coal miners with black lung disease. Some miners used the diagnoses for medical insurance fraud costing the state millions of dollars, the police charged.

Dong was arrested along with two fellow doctors at Guizhou Aerospace Hospital in southern China — Huang Hengping and Zhang Xiaobo — who face similar allegations. The investigation is part of a crackdown by Zunyi city police on what they call false-diagnosis scams. The probe also led to the rejection of compensation claims by nearly 40 mine workers and the detention of seven miners from the Fulai Coal Mine in Suiyang county.

But the police allegations have faced mounting questions from lawyers and the public as the prolonged investigation has yet to provide persuasive evidence. The handling of the cases has stirred controversy as critics charged the police with undermining the rights of miners in favor of local businesses.

Under Chinese law, the mine workers in Zunyi with black lung disease are entitled to a one-time compensation payment of roughly 200,000 yuan ($29,500) through the government medical insurance system, plus more than 50,000 yuan in compensation from the employer, according to calculations by Caixin.

Black lung disease, also known as coal miner’s pneumoconiosis, is caused by inhaling coal dust and can lead to hardening of the lungs and impaired breathing. The condition accounted for 85% of the 26,756 recorded cases of work-related illness in China last year, according to the National Health Commission. Wang Keqin, chairman of the Beijing Daai Qingcheng Charity Fun, estimated that China currently has more than 6 million patients with black lung disease, the most in the world.

Miners, who are mostly former farmers from impoverished areas, often face problems getting a diagnosis and obtaining compensation for black lung disease, said Zhang Haichao, a factory worker from Henan. In 2009, Zhang voluntarily underwent open-chest surgery to prove that he had black lung disease and was eligible for the compensation.

One of the miners who were arrested for alleged fraud in Zunyi is 52-year-old Ren Yunkai. He was diagnosed with stage-one black lung disease at the Guizhou Aerospace Hospital in 2015 and received part of his compensation one year later.

But shortly after the compensation was paid, Ren was taken into police custody and locked up for nearly a month. He was beaten during interrogations, according to his son. On May 17, Ren died of cancer as the investigation into alleged insurance fraud was still pending.

Zunyi in coal-rich Guizhou accounts for almost 40% of the black lung disease cases recorded in the province, reflecting the prevalence of small, privately run coal mines where safety protection is often insufficient, according to the provincial health authority.

Since 2008, miners at the Fulai Coal Mine have been provided single-layer breathing masks. Several former workers said the masks do little to block the heavy dust in which they work, and the employer provided only three masks a month.

Fulai had been in operation for more than 30 years. In 2014, the mine was merged into Guizhou Henglongyuan Mining Co. Ltd. as the province pushed to consolidate the industry. Operations of Fulai were suspended in mid-2015 as it failed to meet certain production requirements.

Although Fulai’s business was halted, it has been embroiled in an ongoing fight with workers over compensation and payouts related to illnesses. Since June 2015, more than 40 miners from Fulai were diagnosed with black lung disease at the Guizhou Aerospace Hospital.

Some workers received only part of their compensation while others complained that they never received any payout, even though regulators accepted their claims and sent the money to the company for distribution by late 2015. Some workers filed lawsuits against the company seeking the payments.

Fulai executives denied that they withheld any compensation due workers and said they paid what they were required to pay.

Several miners then turned to another hospital in the province and were again found to have black lung disease. But these diagnoses were rejected by the local social security authority and Fulai Coal Mine, workers told Caixin.

The seven arrested miners including Ren were grilled on whether they paid doctors at the Guizhou Aerospace Hospital to obtain the black lung diagnoses. They denied any involvement in an insurance scam, miners told Caixin.

Radiologist Huang Hengping was the first doctor at Guizhou Aerospace Hospital targeted by the police probe. According to Huang’s wife, police made several inquiries with Huang between August 2016 and October 2017 but found no evidence that Huang was involved in an insurance scam.

In November 2017, police dropped the fraud charges and instead arrested the three doctors for dereliction of duty. Police said 547 of their previous diagnoses were proved to be false by the Guizhou Provincial Occupational Disease Identification Committee. The false diagnoses of the three doctors have cost the local social security fund more than 10 million yuan, the police said.

But experts challenged the allegation. Guizhou Aerospace Hospital tested more than 10,000 patients suspected of the disease from 2012 and 2016. But police looked into medical records of only about 1,350 patients, said Deng Liqiang, head of the legal affairs department of the Chinese Medical Doctor Association.

That degree of over diagnosis is normal in the industry, Deng said. Meanwhile, the police assessments were made based on chest X-ray films of suspected patients, which is not enough to diagnose black lung disease, according to Deng.

No new institution has yet been approved in Zunyi to diagnose black lung disease. Patients now have to travel more than 100 kilometers to the capital city Guiyang for examination.

Amid public uproar, a local work safety official in early July told Caixin that the government will compensate deserving workers according to the law while clamping down on violators. The official didn’t say whether the Fulai workers and doctors were found in violation.

After seven months in police custody, Dong was released on bail in late June. She is refusing to meet with outsiders while awaiting trial.

“I heard she lost 20 kilos,” or 44 pounds, one of her colleagues said. “She’s in a poor mood and doesn’t want anyone to see that.”