By Wu Xiaomeng and Bonnie Cao 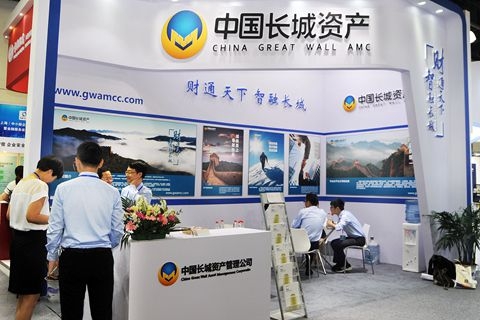 China’s Great Wall is one of four national asset management companies created in 1999 to take over bad loans from state banks. Photo: VCG

The investment is subject to regulatory approval, Zhou said at a press conference in Beijing.

“The fundraising is mainly for capital replenishment and to support our next business development,” Zhou said. The company is actively seeking opportunities for an initial public offering by closely watching capital markets at home and abroad, Zhou said, according to China Securities Journal.

Great Wall is one of four national asset management companies (AMCs) that China created almost two decades ago to help cushion the impact of the Asian financial crisis by taking bad loans off the books of China’s largest banks. The AMCs can recover as much money as possible from assets by selling or restructuring them or by applying other workout methods.

Chinese regulators last year ordered AMCs to set capital adequacy ratios of no lower than 12.5% and raised the capital requirements for affiliated nonfinancial institutions. The standard is stricter than for commercial banks. It also asked the four major AMCs to focus on the disposal of nonperforming assets. The stricter requirements have forced AMCs to seek capital injections.

Great Wall didn’t disclose how the capital injection would affect its capital adequacy ratio. In January, the company said its capital adequacy ratio was 12.55% at the end of 2017. Zhou did say that this year Great Wall plans to purchase nonperforming assets of 120 billion yuan and dispose of 100 billion yuan of nonperforming assets.

The country’s slowing economic growth will drive down the prices of nonperforming assets, while the difficulty of selling assets will rise, said Lei Hongzhang, general manager of Great Wall’s asset management department.