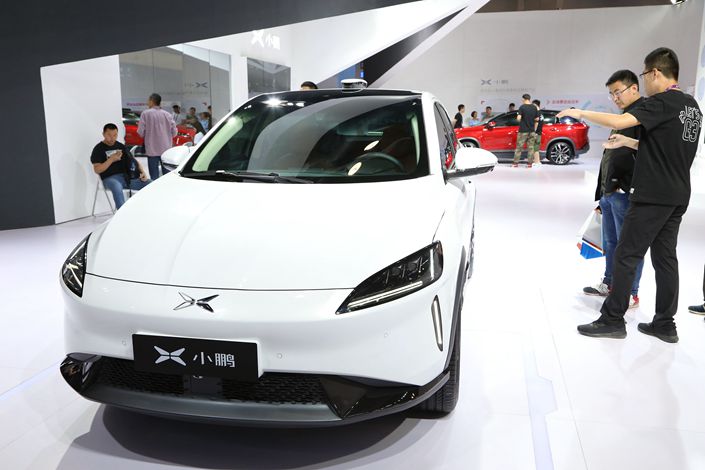 Xiaopeng Motors displays one of its models on April 27 at a tech conference in Beijing. Photo: VCG

Electric-car startup Guangzhou Xiaopeng Motors Technology Co. Ltd. has announced that it raised 4 billion yuan ($587 million) in its latest fundraising round, giving it a valuation of around 25 billion yuan.

In addition to its existing shareholders — Morningside Venture Capital and Primavera Capital Group — the company received support from venture capital groups including Hillhouse Capital Group and Eastern Bell Venture Capital in the B+ round, Xiaopeng said in a statement (link in Chinese) on Thursday.

After the largest fundraising round by a Chinese electric-car company so far this year, the total funds raised by the Guangzhou-based company since its establishment in 2014 have exceeded 10 billion yuan.

“In the current competitive industry environment, Xiaopeng’s ability to continue attracting funding on a massive scale shows that our business is widely accepted,” the statement read.

Xiaopeng is one of a bevy of electric-car specialists in China that have drawn immense investment interest as Beijing seeks to move the country away from fossil fuel-powered vehicles toward new-energy ones.

The startup said it aims to make “internet cars” that are tailored to the tastes of younger Chinese consumers. Earlier this year, Xiaopeng launched its signature G3 model, which comes equipped with an internet-connected 360-degree camera that allows users to capture, save and share footage. The model is expected to enter mass market by the end of this year.

Like its largest rival, the Tencent Holdings Ltd.-backed Nio, Xiaopeng also has a tech giant in its corner— Alibaba Group Holding Ltd. Nio, which has raised 15 billion yuan as of September, is preparing to raise up to $2 billion through a New York initial public offering by year end, Caixin reported in March.

Many other smaller players are also racing to raise capital. Last month, electric-car maker Dearcc said it had raised 2.5 billion yuan in total funding in the first half of this year.

Also, U.S. electric-car leader Tesla has recently ramped up its presence in China. In July, the company signed agreements with Shanghai to set up a vehicle assembly plant that will have the capacity to produce 500,000 all-electric cars a year.