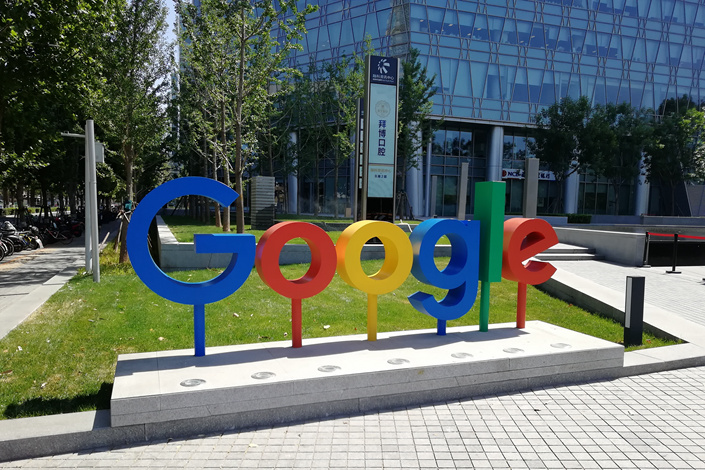 * In a response to questions about the report, Google said that it doesn’t comment on “speculation about future plans”

* Even if Google wants to return to the Chinese mainland, it will face difficulty getting permission from Beijing

(Beijing) — Search giant Google LLC on Thursday declined to comment on a widely cited media report saying the firm was preparing to launch a new China search engine, but pointed out it has taken recent steps to boost its online product offerings in the market.

Google shuttered its China search engine in 2010 after a high-profile spat over Beijing’s strict policies that require all internet companies to police themselves for sensitive content. But in recent years the company has made steady moves to re-engage with a country that has become the world’s biggest internet market and has produced some of the world’s most valuable internet companies.

According to a report in The Intercept, Google has been quietly developing a China-specific search engine under the code name Dragonfly, which won’t return results on subjects deemed too sensitive by Beijing. Such actions are required of all internet companies operating in China, and other big names like professional networking giant LinkedIn and hotel room alternative Airbnb have addressed the issue when announcing their own decisions to enter the market.

Google has been working on the project since spring 2017, and activity picked up the pace following a meeting late last year between CEO Sundar Pichai and an unnamed top Chinese official, The Intercept reported, citing internal Google documents and unnamed people familiar with the plan. A finalized version of the new service could be launched in as little as six to nine months.

“We provide a number of mobile apps in China, such as Google Translate and Files Go, help Chinese developers, and have made significant investments in Chinese companies like JD.com,” Google said in a statement to Caixin in response to The Intercept report, referring to a number of the company’s China initiatives over the last two years. “But we don’t comment on speculation about future plans.”

Even if Google wants to return, it could still have difficulty getting permission from Beijing, which has been lukewarm to big foreign internet names, analysts said. Facebook has been actively seeking permission to launch a Chinese version of its popular social networking site for the last few years, but has yet to receive such permission.

“I will believe it when I see it,” said Ryan Roberts, an internet analyst at MCM Partners. “It represents a pretty significant departure from their strategy and their branding and images they’ve been developing over the last 10 to 15 years, ‘Do no evil’, which is why they left China in the first place,” he added, referring to Google’s motto.

If it does get permission to return, the company could do relatively well by providing a strong alternative to market leader Baidu Inc., which has been criticized in the past for manipulating search results to benefit advertisers and its own sites, and also for lax protection of user privacy.

Being able to use Google on the mainland, rather than rely on Baidu, would be a welcome relief for people who are trying to get data or find articles, Roberts said. “Google seems to understand better what users are looking for,” he said.

Since shuttering its China-based search service in 2010, Google has continued to maintain its China-based web address at Google.cn. But that acts mostly as a placeholder that directs users to the company’s main Chinese-language search page based in Hong Kong, where Beijing’s strict rules regarding sensitive content don’t apply. That site is blocked to most mainland-based users, along with most of the world’s major social networking sites including Facebook and Twitter.

But more recently Google has quietly begun to develop a new group of China offerings and stage locally-based activities under the leadership of Pichai, who joined in 2015 — well after the initial spat with Beijing. The company now holds regular conferences for its locally based developers, and hosts a group for them on the popular WeChat instant messaging service.

Last year Google’s AlphaGo computer handily defeated China’s top player in the ancient board game of Go, in a widely watched local event that showcased the superior skill of artificial intelligence over humans in the game. Also last year, the company opened an AI center in Beijing, and last month it launched a Chinese version of its AI game called “Guess My Sketch.”

This story has been updated to clarify a quote by an analyst.