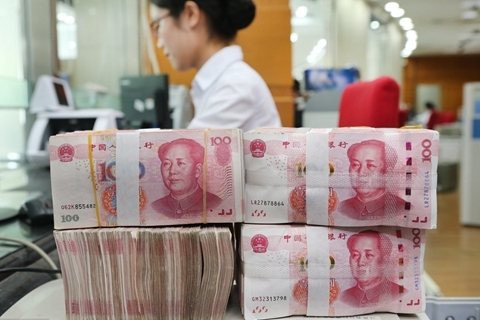 China’s central bank fined five financial institutions for violating anti-money laundering law as part of a crackdown that started last year on the 10th anniversary of the legislation.

This was the first time for the Beijing head office of the People’s Bank of China (PBOC) to slap money-laundering fines on financial institutions. Previously only regional offices of the central bank imposed penalties against local lawbreakers.

The fines were levied against Bank of Communications, Ping An Bank, Shanghai Pudong Development Bank, Galaxy Securities and China Life Insurance for violations that occurred between July 1, 2015, and June 30, 2017, the PBOC said Wednesday in a statement on its website.

The penalties ranged from 700,000 yuan to 1.7 million yuan ($102,000 to $250,000) for violations including failing to verify client identities, failing to properly store customer identity documents and transaction records, and failing to report large, suspicious dealings, the central bank said.

Galaxy Securities was fined 1 million yuan, the largest penalty given to a brokerage company this year, for processing transactions for unidentified customers and other violations.

In 2017, the central bank and its local branches carried out nearly 2,000 inspections and levied a total of 134 million yuan of money-laundering fines, more than double the amount in 2016.

In addition to banks and traditional financial institutions, the central bank also extended its fight against money laundering and terrorist financing to certain non-financial sectors.

According to a recent PBOC statement, real estate developers and intermediary services providers, precious metal exchanges, accounting firms and law firms now are required to report suspicious transactions. These institutions are also subject to the PBOC penalties for any insufficient anti-money laundering measures.

China’s tightening supervision coincides with a review being conducted by a global anti-money laundering organization.

The Financial Action Task Force (FATF), a global standards-setter on anti-money laundering and other economic crimes, is conducting a fourth round of mutual evaluations to determine whether China’s legal and institutional framework is effective in combating money laundering and financing of terrorism.

The FATF staff will have closed-door interviews with about a dozen institutions in cities including Beijing, Shanghai and Shenzhen. Regulators are not allowed to be present in the interviews, Caixin learned. The results will be published on the FATF website, most likely in spring 2019.

China has completed the past three rounds of evaluation by the FATF. The biggest challenge in the fourth round is whether China’s anti-money laundering system established in accordance with global standards is as effective as expected, a regulator told Caixin.

If China’s approach is found to be inadequate, institutions might face even tougher requirements on their anti-money laundering measures.