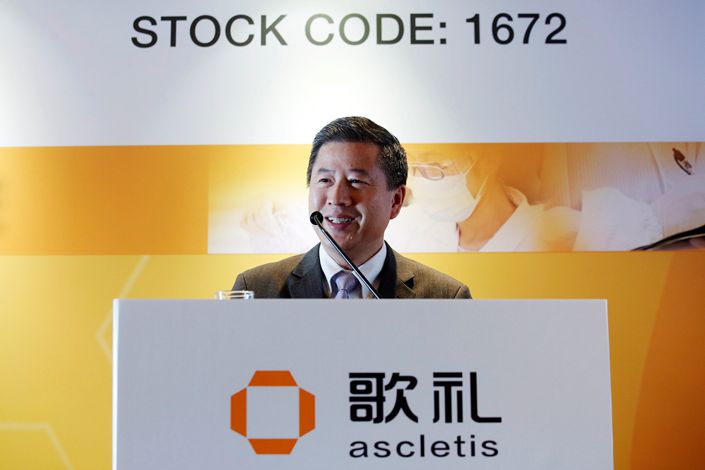 Investor fatigue ailed Ascletis Pharma Inc. on Wednesday, as shares of the first money-losing biotech firm to list in Hong Kong lilted on their trading debut.

The listing marked a major milestone for the former British colony, which recently eased a longtime profitability rule in order to attract hot startups from the drug sector. Such firms often post losses for years while putting their promising drugs through rigorous testing to receive government approval. But they can yield handsome profits if those efforts prove successful.

Ascletis’ IPO has received lukewarm reception from investors since it kicked off the process in May. It ultimately priced its shares at HK$14 ($1.80), in the middle of a previously announced range of HK$12 to HK$16. The stock rose as much as 6.4% after trading began in Hong Kong, and later fell as much as 2.4%. But at the end of its first day it finished right back where it started at HK$14.

The company sold about 224 million shares in the offering, meaning it would have raised about $400 million from the listing, according to Caixin’s calculations.

Ascletis is one of a new generation of privately-funded Chinese drugmakers being courted by both China and Hong Kong, which want to bring more such high-growth companies to their boards. While Hong Kong has relaxed its longtime profitability rules to attract the companies, China has rolled out an expedited application program allowing such high-growth firms to avoid the usual long waiting times to list on its boards.

Based in the city of Hangzhou, capital of East China’s Zhejiang province, Ascletis specializes in developing anti-viral, cancer and fatty-liver-disease drugs. It became the first company to apply for a listing after Hong Kong lowered its rules in late April. Since then, at least six other biotech startups have filed for similar IPOs, including Hua Medicine and Innovent Biologics Inc. One of those, BeiGene Ltd., is aiming to become one of the first such Chinese startups with dual listings in New York and Hong Kong, with plans to debut Hong Kong shares on Aug. 8 to complement its existing Nasdaq listing.

Founded in 2013, Ascletis posted revenue of about 51 million yuan ($7.5 million) in the first quarter of this year, roughly the same as its revenue for all of 2017, as it began to receive money from one of its partners for a drug that went on sale in June this year. It neared the break-even mark in the first quarter by posting a small loss of 858,000 yuan, down sharply from the 86.9 million yuan loss for all of 2017, according to its IPO prospectus.