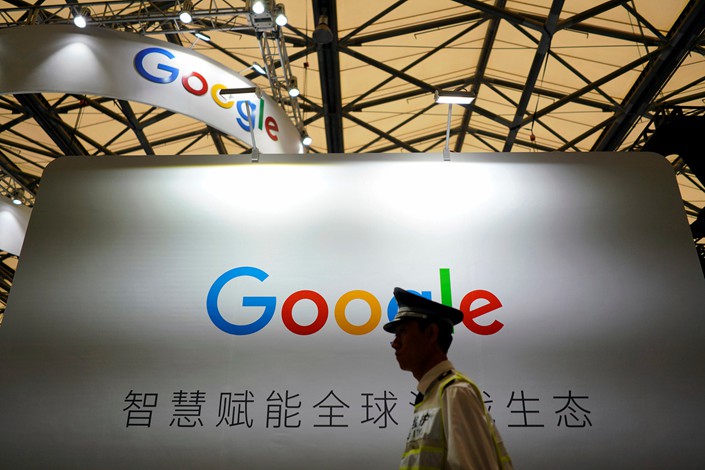 A Google LLC sign is seen during the China Digital Entertainment Expo & Conference, or ChinaJoy, in Hong Kong on Friday. Photo: VCG

(Beijing) — Global search leader Google LLC made a “huge blunder” by deciding to shutter its China-based search engine in 2010, but should be allowed back into the country if it plays by Beijing’s strict rules for media oversight, the official newspaper of the country’s ruling Communist Party said.

Google has made global headlines over the last week after The Intercept reported the company was secretly developing a new version of its search engine for China, which requires all websites to strictly police themselves for sensitive content. Google itself has declined to comment directly on the report, although it points out it has made other recent moves to re-engage with China’s internet community following its high-profile withdrawal in 2010.

The most recent of those saw the company launch a Chinese version of a game based on artificial intelligence technology just last month.

The official People’s Daily joined a chorus of local voices that say they might welcome a return of Google, according to an editorial posted on the paper’s official Facebook account on Monday. Many others have become disillusioned with current market leader Baidu Inc., which rakes in more than 80% of China’s online search revenue and has developed a reputation for putting advertisers above ordinary consumers.

“The decision to exit the Chinese market was a huge blunder, which made the company miss golden chances in the mainland’s internet development,” the People’s Daily said in an English-language editorial that was posted on its Facebook account before later being removed. “Google is welcome to return to the mainland, but it’s a prerequisite that it must comply with the requirements of the law.”

After coming to China in 2006, Google shuttered its locally based search engine four years later after a high-profile spat over Beijing’s strict self-policing requirements that often meant search results on sensitive topics would come back empty. Since then, however, China has rapidly risen as the world’s largest mobile internet market, riding on the back of its more than 1 billion mobile subscribers.

Google’s Android operating system powers the vast majority of China’s smartphones, and China itself is the world’s biggest market with around 100 million units sold each quarter. Despite that, Google has no direct control over Android phones sold in China, which are manufactured by third-party names like Huawei Technologies Co. Ltd. and Xiaomi Corp. It also lacks a China version of its Google Play store that carries Android apps.

The People’s Daily editorial said Google has become a “politicized brand,” pointing out that many Western media, U.S. politicians and human rights activists have already “poured scorn on the company” for its apparent plan to return to China.

“This is undoubtedly a tragedy for this well-known multinational company,” the editorial wrote, defending China’s right to treat cyberspace with the same idea of sovereignty as it would a country’s physical borders. It ended by saying that Google itself will ultimately determine if it is allowed back into China and how it might fare if that happens.

“Google failed to understand the Chinese market eight years ago,” the editorial said. “Whether and when it can return hinges on its own attitude. Only by respecting local laws and regulations and following local customs can multinational companies win local consumers and the market.”