Opinion: Have China, U.S. Passed Point of No Return? 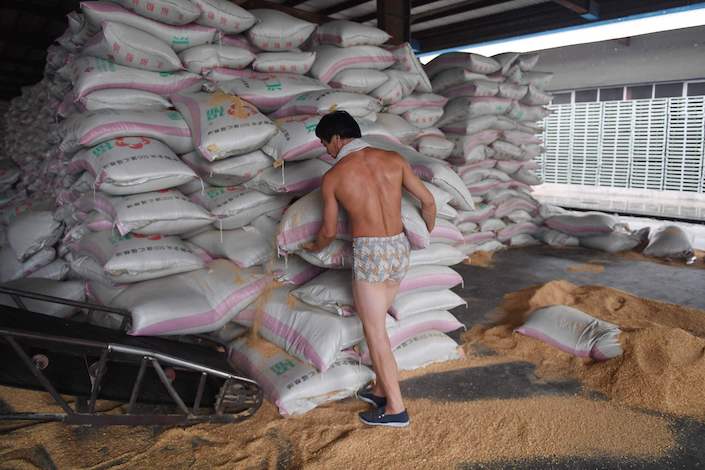 A worker loads sacks of animal feed made from soybeans at the Hopefull Grain and Oil Group in Sanhe, in China's Hebei province, on July 19, 2018. Photo: VCG

On Aug. 2, U.S. President Donald Trump asked the office of the U.S. Trade Representative (USTR) to consider raising proposed tariffs on $200 billion worth of China products from 10% to 25%, provoking the Chinese government to threaten retaliation.

While China’s proposed countermeasures are not fully reciprocal, targeting only $60 million worth of U.S.-made products, they would certainly further escalate the U.S.-China trade conflict. The U.S. has already unveiled 25% tariffs on $50 billion worth of Chinese-made imports, so if the U.S. follows through on Trump’s threat, it will be levying a 25% tariff on $250 billion of Chinese products.

We at UBS believe the risk of the trade conflict escalating into a comprehensive trade war has risen markedly since June. Trump has expressed his willingness to increase tariffs on up to $507 billion of Chinese imports. UBS’s U.S. team believes that Trump has almost total control over trade negotiations, and if he believes the U.S. should increase tariffs on $250 billion of Chinese imports to 25%, U.S. trade officials can almost certainly find some justification for doing so before the end of the year.

The U.S. government appears to believe that raising tariffs is the only way to compel China to give up or begin to reduce its trade deficit. While China is willing to compromise to an extent, it is not willing to be the only party doing so in this trade conflict, especially since China’s exports to the U.S. account for one-fifth of its total exports. So, if the U.S. continues to use this tactic, a reduction in the trade deficit will at best be a hypothetical possibility.

What will the impact be if the U.S. imposes a 25% tariff on $250 billion of Chinese-made imports?

The USTR has postponed the deadline for investigating and collecting public opinions on the proposal until Sept. 5, but we have assumed in our forecast of China’s 2019 gross domestic product (GDP) growth — 6.2% — that the U.S. will go ahead with its previous proposal to impose a 10% tariff on $200 billion of Chinese-made goods at the end of September.

We have estimated that if the original proposal (of 25% tariffs on $50 billion of Chinese goods, and 10% on $200 billion) comes into effect, it will drag China’s GDP down through direct and indirect means by 0.5% in the first 12 months. Even if we factor in the boost to China’s GDP from the possible loosening of domestic policy, there may still be an over 0.3% decline in GDP growth. If the U.S. raises its planned tariffs on $200 billion of Chinese goods to 25%, as Trump has recently requested, the decline in China’s GDP growth next year could even exceed 0.8%. However, in this worst-case scenario, there is a chance China will double down on its policy easing efforts, to partially offset external shocks and keep the country’s GDP growth in 2019 above 6%.

China’s possible tariff increase on imports from the U.S. could push up its consumer price index, but the decline in the price of oil caused by U.S.-China trade tension will completely offset or even push inflation down. At the same time, in this situation, the value of the yuan could fall past seven against the U.S. dollar next year. Unless a total trade war breaks out, this devaluation will not be caused by China actively devaluing the yuan or dumping U.S. bonds as a retaliatory tactic. Rather, it will be due to the fact that, as trade tensions continue, the pressure on the yuan to depreciate will continue to increase, even if China’s central bank focuses on keeping the exchange rate stable. It is worth noting that the central bank raised the reserve requirement for foreign exchange settlements to 20% on Aug. 3, and there are signs of the central bank’s effort to maintain stability in both onshore and offshore yuan markets.

If the U.S. does not implement further tariff increases, we at UBS believe China will avoid launching retaliatory measures of a similar scale. The Chinese government still has room to maneuver before the U.S. fires its next shot. In fact, China has accelerated its opening up markedly in recent weeks. In addition to opening up the automobile and financial industries to foreign investors, a number of foreign-Chinese joint ventures have also been announced in the aviation, e-commerce, and food and beverage industries.

In addition to calling for continued deleveraging and deepening of reforms, China’s Politburo meeting on July 31 also clearly called for the protection of the legitimate rights and interests of foreign-funded businesses in China. This shows that China will not be meting out targeted punishment to U.S. companies in China. In order to promote domestic reform and protect China’s core interests, the government is expected to continue carefully managing market expectations, through measures such as maintaining a balance between marginal easing and promoting deleveraging. At the same time, the government will do its best to prevent trade tensions from turning into a full-blown, comprehensive trade war.

What will the next step be? The U.S.-China relationship has not yet passed a point of no return, but the conflict has certainly escalated. There is a risk that that this will happen in the near future: The U.S. government will continue to pursue its current tactics and refuse to make concessions, in order to compel China to meet U.S. demands. The Chinese side will refuse to comply, prompting the U.S. to continue raising tariffs until they affect all Chinese imports into the U.S.

Even though both countries have appeared to indicate a willingness to resume negotiations and avoid further escalation, if only one party is willing to compromise, the possibility of a positive outcome in the short-term is very low, and we predict there will be a downward trend in China’s economic growth.

The biggest source of downward macroeconomic pressure placed on China by trade tensions will come from its knock-on effects on corporate investment and household consumption, including the uncertainty brought about by increasing trade friction, as well as its impact on enterprises’ strategy, profits and revenue growth. A comprehensive trade war, which we define as a situation where the U.S. and China impose high tariffs (such as 30% ones) on all of each other’s exports while introducing nontariff trade barriers, will seriously drag China’s economic growth downward.

Wang Tao is the head of China economic research at UBS. This piece was translated from Chinese and edited for length.