Wang Tao: What Would a China-U.S. Trade Deal Look Like? 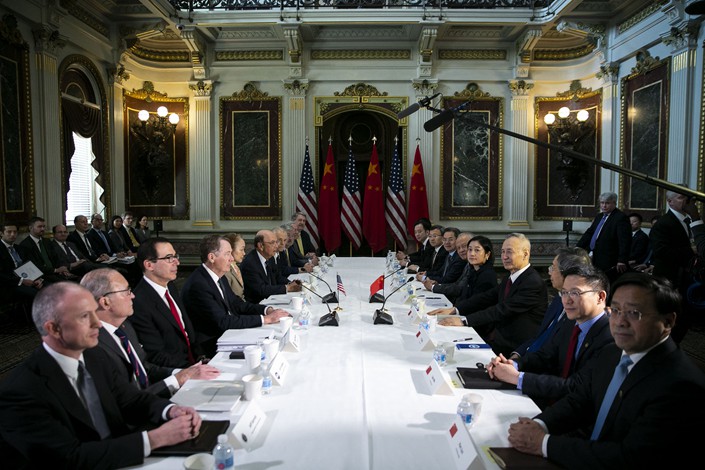 As Chinese and U.S. officials made “substantial progress” on the latest round of trade talks, the U.S. has agreed to delay the March 1 deadline for a tariff surge. While the date and location of the next meeting between Presidents Xi Jinping and Donald Trump have not been agreed on yet, a broader framework for the eventual trade deal could be sealed by the two presidents sometime in March or April. This is in line with our current baseline of an extended deadline for trade talks and no tariff increases on March 2, while the probability of a broader trade deal with existing tariffs being rolled back over the coming year has increased.

What could a deal look like? The details of any U.S.-China trade deal will likely only be finalized and released either at or after the next Xi-Trump meeting. Our best guess is that a broad agreement could contain the following elements:

• The U.S. will not raise the 10% tariffs on $200 billion of Chinese exports immediately after March 1 (no immediate escalation), existing tariffs may stay for a while longer or be rolled back in the coming months (if the Section 301 investigation is closed)

• China will significantly increase imports from the U.S., especially agricultural and energy products

• China will enforce the ban on exports of the illegal substance fentanyl to the U.S., both sides agree to cooperate on cybersecurity and international issues

• In the case of a broad deal, U.S. sanctions and restrictions on Chinese tech industry may be less severe than they otherwise could have been

What can be observed in the near term? For China, the U.S. will not increase tariffs further on imports on March 2, will agree to continue negotiations and may even agree to gradually roll back some existing ones. In addition, the U.S. may impose less severe sanctions and export restrictions against Chinese tech companies in the near term. For the U.S., China will immediately import more products (actually imports of soybeans have started), act to enhance IP protection through the amendment of Chinese patent law and better enforcement mechanisms, roll back higher tariffs on imports from the U.S. (e.g. automobiles), China will enforce the ban on exports of fentanyl to the U.S., expedite the approval of U.S. companies entering various sectors, including the financial services, agriculture and automobile sectors.

Commitment to structural changes will require ongoing monitoring and negotiations. The U.S. will likely demand regular monitoring and verification of China’s commitment to better IP protection, domestic market opening beyond the granting of licenses and approvals, a ban on forced technology transfers, the reduction of nontariff barriers, and the reduction of subsidies in various sectors and other market-oriented reforms. Cybersecurity and international cooperation issues will be an ongoing process for both sides. In addition, China will need to observe how the U.S. may tighten and place new restrictions on Chinese investments, Chinese companies, market access, and access to technologies going forward.

What is unlikely to change? No matter how far-reaching (or not) the potential trade deal might be, we do not see U.S.-China trade relations (or general relations for that matter) returning to pre-trade war conditions. Most of all, the U.S. will likely further restrict Chinese investment in the U.S., China’s access to technology and high-tech products in the coming years. Also, we expect the U.S. to use the threat of increasing tariffs, financial sanctions or cutting China’s access to technology as important tools to enforce any trade agreement. As such, export-oriented businesses operating in China and companies in China-global supply chains will still face heightened uncertainties. While China is willing to negotiate and compromise on many fronts, we think it is highly unlikely to give up its ambition to move up the value chain and acquire advanced technology (albeit it may tone down Made in China 2025 targets and reduce related state subsidies). While China may deepen reforms of state-owned enterprises (SOE), these reforms are likely to be designed to make SOEs more efficient and stronger, not to privatize or dismantle them.

As we pointed out earlier, both China’s export and gross domestic product (GDP) growth will be stronger than our baseline forecasts in the case of a broad U.S.-China trade agreement (rather than a mere extension of the negotiation deadline), especially if existing tariffs are rolled back soon. However, uncertainty related to potential future tariff increases and access restrictions by the U.S. will likely linger and dampen capital expenditure in China. Moreover, we think policy stimulus may also be held back somewhat as economic activity and confidence rebound. For example, quasi-fiscal spending may not expand as much and liquidity and credit easing may not be as large. Therefore, we think the upside to China’s 2019 GDP growth will likely be limited (6.2% to 6.3%).

In the case of a broader deal, both China’s likely commitment to not depreciating the yuan and improved market sentiment may bring yuan appreciation, moving the yuan towards 6.5 to the dollar, though we see the yuan trading largely between 6.6 and 7 to the dollar this year, barring any significant moves in the dollar to euro exchange rate.

Although most investors don’t expect tariffs to be raised on March 2, a broad U.S.-China trade deal where the truce could last more than 90 days and existing higher tariffs may be rolled off would nevertheless boost market sentiment in China and globally. Given the importance both U.S. and China have put on currency, increased expectation of a trade deal should help lift the yuan against the dollar, which in turn, could support other Asia and emerging market currencies as well. Meanwhile, China’s onshore bond market may see yields moving up somewhat on likely smaller policy stimulus.

A trade deal will of course help lift sentiment in the export-related sectors and be positive for the more export-oriented economies in East Asia. A softer export deceleration in China would also help reduce pressure on the job market and on consumer confidence. Specifically, a trade deal will mean consumer electronics and other tech products currently not on the tariff list will stay off it. Moreover, to the extent the U.S. will impose less severe restrictions and sanctions against Chinese tech firms, it will also be positive for the tech supply chain.