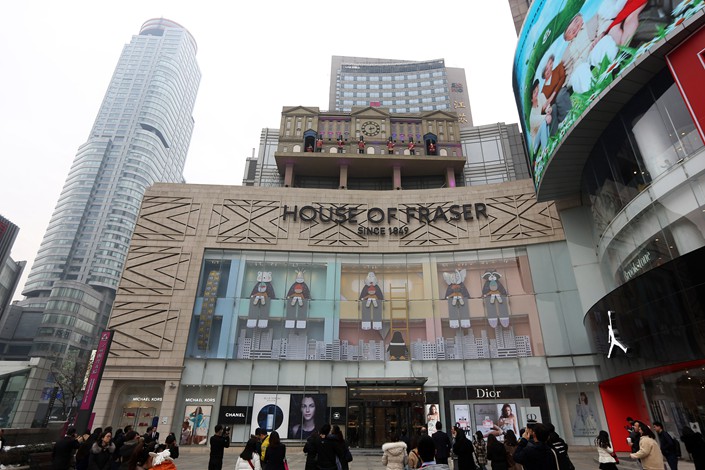 A House of Fraser store in the eastern city of Nanjing on Feb. 9. Photo: VCG

The owner of historic British department store operator House of Fraser Group Ltd. has recently taken some tough blows regarding the future of the money-losing brand: an equity sale plan collapsed, followed by the liquidation of three British and Irish subsidiaries.

Nanjing Xinjiekou Department Store Co. Ltd.’s tenure as owner has been another story of a low-profile Chinese company that has struggled to make a success of a storied foreign brand it acquired by taking on a huge amounts of debt.

Although Sports Direct International PLC, a British sports retailer owned by mogul Mike Ashley, has agreed to buy all 59 House of Fraser stores in the U.K. and Ireland for 90 million pounds ($115 million), its Chinese parent Nanjing Xinjiekou had to move forward with the liquidation of the three bankrupt subsidiaries that operated the shops as the proceeds from the asset sale couldn’t cover their debt.

Nanjing Xinjiekou President Fu Dunxun admitted Tuesday that the bankruptcies would have a “significant negative influence” on the Shanghai-listed retailer, as it would result in goodwill reduction of roughly 211 million pounds, which would affect the company’s net profit for the year. The company and its auditors are still calculating the exact losses.

Goodwill is an intangible asset that commonly accumulates during acquisitions. Nanjing Xinjiekou, together with its parent Sanpower Group, made headlines in 2014 when they defeated bidders including France’s Galeries Lafayette SA to buy 89% of the classic chain for 480 million pounds.

But four years on, the Nanjing-based company said that House of Fraser has been losing money. The owner reported a net loss of 319 million yuan ($46 million) for House of Fraser last year, down from a profit of 115 million yuan in 2016, citing Britain’s decision to leave the European Union along with a slump in the retail industry.

In March this year, it decided to sell a 51% stake in House of Fraser to a local tourism company. The buyer was later replaced by Hong Kong-listed retailer C.banner International Holdings Ltd., which agreed to pay 1.2 billion yuan for the shares.

However, the deal was scrapped last week because the buyer was unable to raise enough cash. After the latest sale of its U.K. and Irish stores, the Chinese owner still runs two House of Fraser stores in its home town of Nanjing and the neighboring city of Xuzhou.

This has been the latest case of a renowned foreign brand failing to maintain its shine after having been acquired by a Chinese company.

Chinese television-maker TCL Corp. bought the TV unit of French electronics giant Thomson — now Technicolor SA — in 2003, and the pair formed a joint venture for the Europe market afterward. But the entity reported years of losses, only to go bankrupt four years later. TCL also found trouble adapting to local legal culture, as it wished to lay off 30 Thomson employees amid the acquisition, but didn’t expect to face a workers union so strong it could obstruct the redundancies for months.

This has been a common problem with enterprises jointly operated by Chinese and foreign teams, as they have different ideas about management and corporate culture, which can’t be solved in a short term, said Zhu Danpeng, an analyst with the China Brand Research Institute.

At the same time, both House of Fraser and its Chinese parent are in an industry that has been challenged by the internet. Independent retail analyst Li Chengdong told Caixin that the whole retail industry is shrinking in the age of e-commerce. In China, foreign brands have had to cope with challenges from not only from online shopping, but also local rivals, he said.

Only one of the top ten department store operators in China has foreign roots — the Malaysia-based Parkson Holdings Bhd. which ranked fifth in 2017 with a market share of 1.4% — according to market research firm Euromonitor International.

Nanjing Xinjiekou is also shifting from the retail industry toward the more lucrative health care sector, according to its annual report. It runs several companies that provide elderly care services and develop cell-related therapies.

Shares of the Shanghai-listed retailer dropped 1.15% on Tuesday.