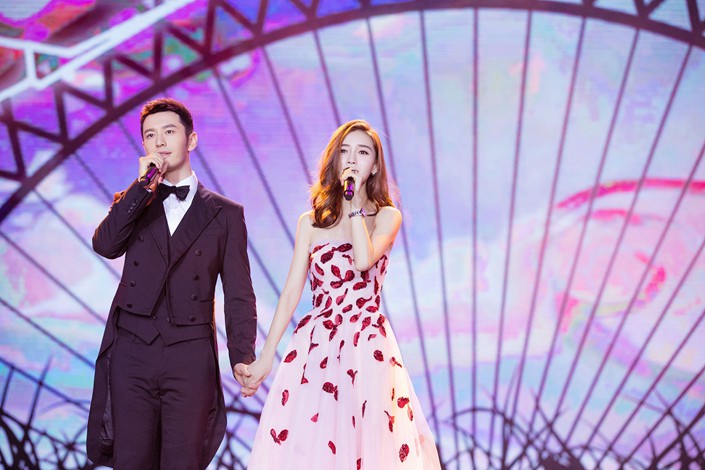 Huang Xiaoming and his wife Angelababy sing at an event in Beijing on Jan. 20. Photo: VCG

Huang Xiaoming, half of China’s top celebrity power couple, has been caught up in a scandal over stock manipulation, the latest star to hit the headlines for the wrong reasons.

Although there is no evidence that Huang was involved in the pump-and-dump scheme revealed by the stock market regulator in July, it has emerged that one of the 16 accounts used to trade and manipulate prices belonged to him. The news has lit up the gossip pages of the internet and once again put the spotlight on the financial activities and wealth of the country’s celebrities.

Heartthrob Huang, 40, who is married to actress and model Angelababy, 29, has not made any public comment on the issue, but his studio put out a statement on Saturday (link in Chinese) denying that Gao Yong, the trader behind the racket, was an acquaintance. It also said that Huang was not involved in any stock manipulation or any investigations related to the case.

Sources close to the China Securities Regulatory Commission (CSRC), who declined to be identified, told Caixin that Huang would not face punishment from the watchdog as he was not directly involved in the scheme.

Huang ranked 16th on the Forbes China Celebrity 100 list in 2017, with earnings estimated at 170 million yuan ($24.7 million), while his wife was in eighth place, with an estimated income of 200 million yuan.

Huang’s connection to the scandal came to light in July when the CSRC issued a statement (link in Chinese) about the findings of its investigation into stock manipulation of Shenzhen-listed Jinghua Pharmaceutical Group Co. Ltd. from January to June 2015. The watchdog slapped a fine of 1.79 billion yuan on a man named Gao Yong for masterminding the scheme, which involved driving up the price of the stock and then selling it, a process known as “pump and dump.”

The CSRC said Gao, who made a profit of 897 million yuan, conducted the manipulation through 16 stock trading accounts which were not in his name but which he controlled. One of the accounts belonged to an individual surname Huang, the CSRC said.

Although lending stock accounts to other traders contravenes the spirit of the country’s Securities Law, which specifies that any trading should be based on a real-name system, such behavior is common practice in China, said Tang Xin, a professor at Tsinghua University's law school.

Under current securities regulations, account holders are not liable for the actions of those who use their accounts. A source close to the CSRC told Caixin that Huang and his mother would not be held responsible if they were unaware of the trading being conducted through the account.

Gao Yong had built a name for himself as a veteran stock market investor. He was a trader at a Beijing-based investment consulting firm back in 2010 and gained attention after he won a local stock investment competition sponsored by the Shenzhen Economic Daily, earning an 80.9% return in 55 trading days.

He gave seminars on securities investment at Renmin University in Beijing in 2011 where he met up with Lu Lei, a private equity fund manager who later introduced Huang’s mother to Gao, Caixin's own investigations show.

Interest in the financial dealings and wealth of China’s celebrities has mushroomed over the last few years as their incomes have surged. Actors and actresses have been caught up in stock market scandals and, most recently, in allegations of tax evasion.

Billionaire actress and director Zhao Wei, Huang’s classmate during his days at the School of Performing Arts under the Beijing Film Academy, was banned from the securities market for five years in 2017 for misleading the market and investors over her company's botched acquisition of animation studio Zhejiang Wanjia.

Actress Fan Bingbing, who has topped the Forbes China Celebrity 100 list for the last four years, was ensnared in a tax evasion scandal earlier this year when popular former TV presenter Cui Yongyuan posted contracts on the Internet allegedly showing she had received a hidden payment of 50 million yuan for starring in a film in addition to her main taxable fee of 10 million yuan. Fan denied the allegations but the tax authorities launched an investigation into celebrities' use of business contracts to evade taxes.