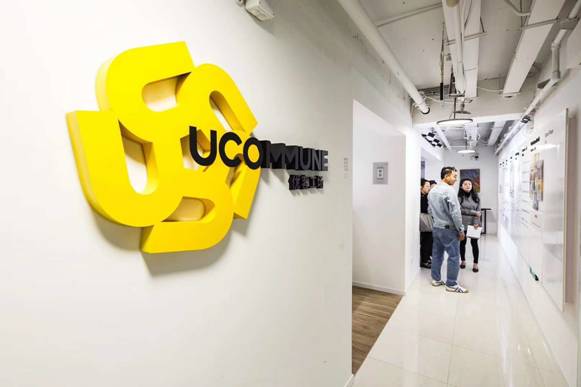 Ucommune was valued at $1.8 billion in the latest funding round. Photo: Ucommune

Operators of co-working spaces in China are becoming the new darlings of investors who are betting on the growing fondness for shared-economy and flexible working environments among younger generations.

The Ucommune funding round put the value of the three-year-old company at $1.8 billion. That made it the first Chinese co-working office startup with a valuation more than $1 billion, qualifying the company for status with investors as a unicorn.

Ucommune is the third shared-workspace operator in China to disclose new fundraising over the past three weeks. On Monday, MyDreamplus, a Beijing-based startup, raised $120 million in a series C funding round led by Hillhouse Capital and General Atlantic.

In late July, the global shared-workspace giant WeWork Cos. Inc. said it had secured $500 million in new funds for its China operation. The New York-based company is moving to expand its services to more Chinese cities. WeWork’s China unit was valued at $5 billion by investors including Trustbridge Partners, Temasek, the SoftBank Group, the SoftBank Vision Fund and Hony Capital, Caixin learned.

In a survey of 200 leasing clients, real estate firm Colliers International found that more than 56% are using co-working spaces and more than 90% are considering adopting co-working for their offices, Ucommune said in a news release.

Investors are rushing into the fledgling market. So far this year, players in the sector have raised more than 5 billion yuan from investors, according to Ucommune.

Ucommune, which was known as UrWork until a WeWork lawsuit forced it to rebrand, has completed more than 10 rounds of fundraising over the past three years. The latest round came just two months after the previous funding in June.

Ucommune will deploy the fresh capital to drive further global expansion and service upgrades, according to company founder and Chairman Mao Daqing, who is a real estate veteran.

"The concept of co-working has evolved tremendously over the last two years to one that compasses traditional rental, bespoke design, community networking and new retail,” Mao said. “We seek to further upgrade our integrated co-working experience through tapping into the community synergy and the potential of commercial contexts."

Ucommune launched a string of acquisitions of smaller domestic rivals this year. From January to June, Ucommune added 2.5 million square feet of managed space to reach a total of 6.2 million square feet, according to the company.

Ucommune said it has achieved positive cash flow from its property management business. Co-working service income during the first half this year was 2.5 times that of 2017. As of July, Ucommune operated shared workspaces in more than 160 locations in more than 35 cities globally, including Singapore, New York, Beijing, Taipei and Hong Kong, servicing more than 8,000 enterprises and 150,000 individual clients, the company said.