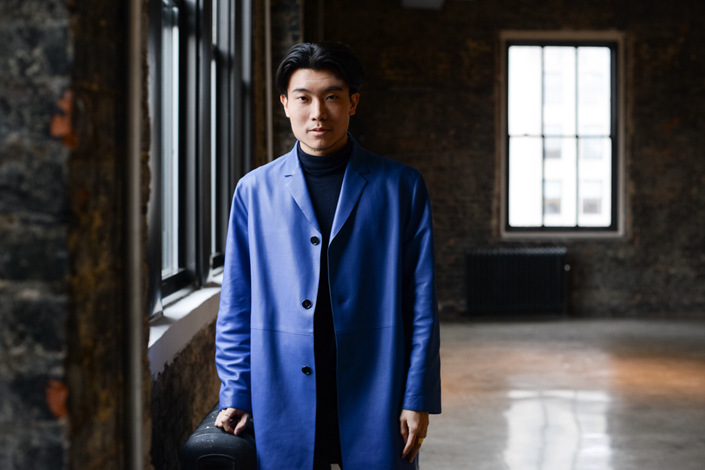 Located in the vibrant streets of Beijing’s popular 798 Art District amid sculptures dramatically posted at sidewalk corners and splatters of intricate murals, the M Woods Museum has become a special attraction for many art lovers.

The private museum, founded in 2014, has flourished in its array of exhibits, featuring both international and Chinese artists, such as the world-renowned Andy Warhol and Lu Yang. Its current show cuts across the boundaries of time, implementing modern-age technology such as virtual reality headsets to provide an immersive look at replicas of the ancient Kizil Buddhist grotto murals.

In 2015, 22-year-old Michael Xufu Huang, a University of Pennsylvania student from Chongqing, joined the Beijing art world’s power couple, Lin Han and Wanwan Lei, in becoming a co-founder of the M Woods Museum. In the following years, Huang was listed as one of Apollo magazine’s “40 Under 40 Asia Pacific” in 2016 and one of Forbes magazine’s “30 Under 30” in the Art & Style category in 2017.

Since his emergence as a museum owner, Huang has been merging all forms of contemporary art with what he refers to as the “post-internet” movement, curating exhibits such as “Heart of the Tin Man,” which was displayed in the museum last year.

Huang exchanged emails with Caixin, sharing his opinion on the present art world in both China and the U.S., the rising popularity of art auctioning, and the art district’s transformation into a tourist attraction and commercial area. The following are excerpts from the exchange.

Michael Xufu Huang: M Woods in America is an interesting thought. I actually spend the majority of my time in New York, so I feel there’s something to be said about our development model and those of American institutions. I also sit on the board of trustees at the New Museum (in New York City).

In its attitude, approach, and staff, M Woods reflects the current youth culture movement of China. The other founders and I are all from Beijing, and we picked Beijing to start a museum because, in spite of the rich cultural resources that have always characterized the city, there’s still an institutional gap that needs to be filled.

The Beijing scene is extremely diverse, with a variety of alternative spaces for art and music within the Second Ring Road, established galleries in 798 and Caochangdi between the northeast Fourth and Fifth ring roads, and artist studios scattered everywhere in between. I think this is a major difference between places like Beijing and New York. In New York, you’re always judged by your proximity to Manhattan, and in Beijing, it feels quite the opposite. People want to get as far away from the center as possible.

M Woods attempts to bridge these worlds, to connect the outstanding artists with eager, young audiences.

What is your opinion on art auctioning, and why do you think it is becoming more popular in China?

If you’ve been following the trends of auction house sales over the past five years, China appears poised to take the lead over long-standing developed markets like London and New York. And interestingly enough, Poly Auction and China Guardian Auctions hold their own against bigger houses, like Sotheby’s and Christie’s.

Many view art as just another means for investment, but there have been other efforts, like the establishment of Sotheby’s Institute of Art at Tsinghua (University), which point toward the continual cultivation of the professional talent so integral to the infrastructure of collecting art.

I do buy works at auctions, but I much prefer buying from galleries. The relationship one nurtures with galleries and their respective artists is an integral part of keeping the art ecology healthy.

How has the 798 Art District changed over the years?

The 798 Art District, where our museum is located, has in the past 10 years or so transitioned from a hub for artists to a destination for domestic and foreign tourists alike, with upscale shopping and dining facilities beginning to take root alongside blue-chip galleries and other museums.

Caixin: How did you come to be a co-founder of M Woods?

I joined M Woods as co-founder in 2015. Lin Han and Wanwan (Lei) had opened the museum the previous year, but were largely still in the planning stages. Wanwan has been like a big sister toward me. We all felt very strongly about creating a museum that could appeal to younger audiences in Beijing, and we set out to create an international platform entirely different from those we’ve seen in Beijing for years.

What is the process behind putting together a show at M Woods?

We approach each show very differently, but for the most part, our shows evolve from our collecting practices and generally exhibit at least partially from the M Woods Collection.

Last year when I curated “Heart of the Tin Man,” there was much discussion among the team about which artists to include. My focus as a collector is geared toward young artists that engage new technologies, but in keeping with the larger mission of the museum to break down geographical/generational delineations with regard to the “contemporary,” we invited a wide variety of artists not typically identified under the rubric of “Post-internet.”

In your opinion, what art is most popular in China right now? Why do you think that is?

Lu Yang, who held a solo exhibition at our museum in the fall of 2017, has consistently received high praise from domestic and international audiences alike. She has an intoxicating love for life and everything Asian, and travels regularly between Shanghai and Tokyo. She is a young new media artist that studied under Zhang Peili at the China Academy of Art, Hangzhou. Her partner, Chen Tianzhuo, formed (performance-art troupe) Asian Dope Boys, which is also hugely popular, and recently performed at Front International in Cleveland. These two artists in particular are especially adept at incorporating multiple subcultures into their individual practices.

What do you see in the future for M Woods and for yourself? Which direction will you take from here?

We have yet to face our biggest challenge: the opening of our second location in Beijing. We have tentative plans to open it in 2019.

We’ll open a solo exhibition of Liang Shaoji in mid-September, then Nicolas Party in mid-November. Next year is a very big year for our exhibitions, with Richard Tuttle, Luc Tuymans, and Liu Wei the Elder all planned. It’s going to be a very exciting year.

As for myself, I feel called to continue my work in the cultural sector, bridging the American and Chinese art worlds as a key influencer.