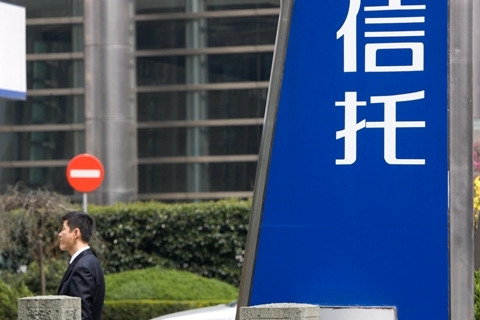 China’s banking regulator has been stepping up scrutiny of trust companies since last year in an effort to tighten lending to the overheated real estate sector. The trust industry has been a key part of China’s massive shadow banking sector, which helps channel funds, especially from banks, into risky investments via complicated trust products to skirt lending regulations.

In response to an inquiry from Caixin, the CBIRC Shanghai bureau said it hasn’t suspended any applications of real estate trust products nor released any notice regarding the issue. CBIRC headquarters was not available to comment.

Caixin has learned that the suspension was not targeting the entire sector but was limited to those trust companies that have exceeded the regulator’s limit on real estate financing trust business.

A real estate business executive at a trust company told Caixin that the regulator has long banned trust companies from channeling funds through trust structures to developers for the purpose of land acquisition, unless for certain qualified real estate projects.

The trust companies were suspended because their real estate trust businesses grew too fast and raised concerns among local regulators. Some local bureaus of the CBIRC have found that more than half of new business at some trust companies was financing for property developers, which is against regulators’ calls for supporting the real economy, the real estate business executive said.

In December, the banking regulator issued a notice banning commercial banks from diverting funds into real estate, local government financing vehicles or the stock market through partnerships with trust firms, which is known as channeling business.

The CBIRC has punished some trust companies for violations. In April, Western Trust Co. was ordered to suspend new channeling business, where the trust product serves only as a fundraising tool for companies that otherwise couldn’t get loans. Channeling business accounted for more than 70% of Western Trust’s total revenue in 2015 and 2016, according to the company’s financial statements.

While there is nothing illegal about the channeling business, trust companies have circumvented regulatory risk-control requirements and invested funds into restricted sectors, such as real estate.