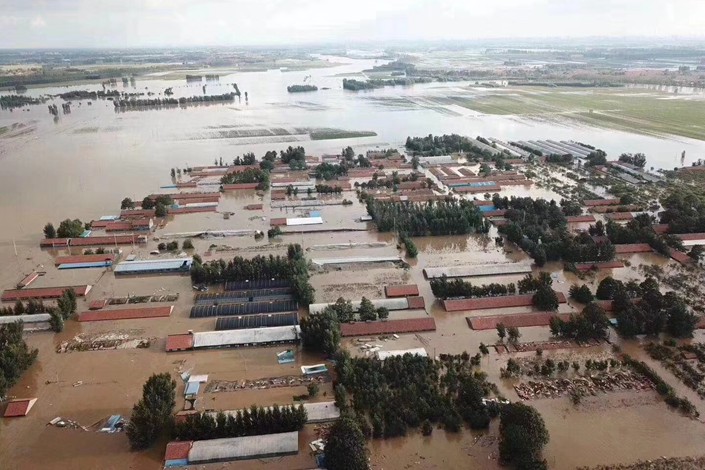 Unprecedented flooding triggered by incessant rain and a last-minute discharge of floodwaters from upstream reservoirs have wreaked havoc in Weifang — a city known as one of China’s top vegetable and fruit baskets — raising concerns that prices of food staples may spike.

Tropical storms Yagi and Rumbia triggered heavy floods, killing 18 in East China’s Shandong province, including 10 in Weifang. Another nine people are unaccounted-for provincewide, including six from Weifang, according to the provincial government.

Direct economic losses from the disaster reported in Weifang reached 9.3 billion yuan ($1.35 billion) by late afternoon Thursday, accounting for more than two-thirds of the losses for the entire region.

In Shouguang, a county-level city in Weifang that’s known nationwide as a major base of vegetable and fruit production, an average of 200 millimeters (7.9 inches) of rain fell on Aug. 20, according to Wang Lingjun, head of the Weifang Meteorological Bureau. This came after days of incessant rain that had already inundated many farms in the city, about 300 miles southeast of Beijing. Shouguang provides the Chinese capital with more than 30% of its vegetable consumption.

Devastation in Shouguang, which has a population of 1.14 million, was exacerbated by the discharge of millions of tons of water from three large upstream reservoirs, a move authorities ordered to prevent breaches. Nearly 21 million cubic tons of water was discharged from the reservoirs from Aug. 13 to Sunday, according to Zhou Shouzong, head of Weifang Water Conservancy Bureau.

A post with videos and pictures showing devastation in Shouguang, including a clip of a vegetable farmer standing in knee-deep water inside his greenhouse farm crying out helplessly and lamenting his losses, went viral but has since been removed.

The extensive damage and signs of spike in vegetable prices has prompted many to question if authorities could handle the flood better to minimize losses for farmers, particularly timing and intensity of discharges of water from the reservoirs.

Quoted by The Paper, water conservation authority in Weifang said that they did not order earlier discharges because they hadn’t expected so much rain and wanted to preserve as much water as possible to tackle a possible drought later in the year.

Making the flood worse was a failure to crack down on an illicit housing development on a riverbed that had been dry for years, and garbage that had been dumped in local waterways, according to the Beijing News.