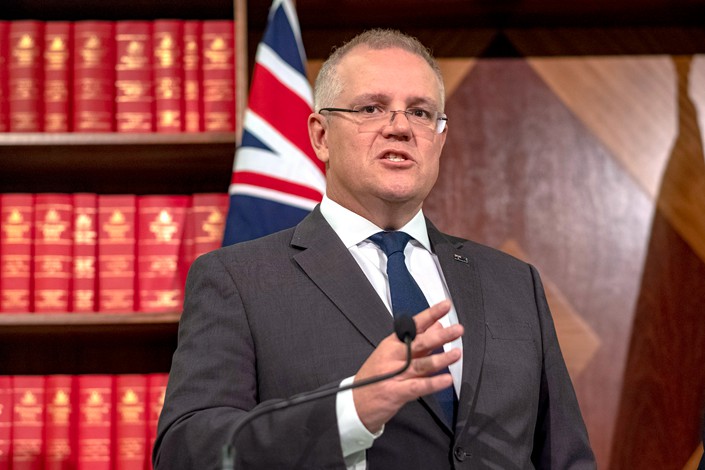 Australia’s new Prime Minister Scott Morrison speaks at a press conference in Melbourne on April 20 when he was still the country’s treasurer. Photo: IC

* As a cabinet member, Scott Morrison issued a guidance that took a skeptical view toward 5G network equipment vendors with ties to foreign governments

* In 2016, he rejected bids by two Chinese companies in the sale of Australia’s largest power grid

(Beijing) — Australia has a new prime minister, Scott Morrison, a conservative that in recent years has blocked several Chinese investments, with observers saying that Canberra is likely to continue to take a tough stance on China.

The ban followed a new guidance issued by then Acting Home Affairs Minister Morrison and Minister for Communications and the Arts Mitch Fifield that required “an extensive review of the national security risks to 5G networks” and said that “vendors who are likely to be subject to extrajudicial directions from a foreign government that conflict with Australian law” may risk failure. The guidance itself didn’t specifically single out any companies.

Hans Hendrischke, professor of Chinese Business and Management at the University of Sydney Business School, told Caixin that the Morrison administration is unlikely to lift the ban because the ruling coalition of the Liberals and the National Party is likely to carry on with tough populist policies against China.

Morrison, 50, is known as an ambitious politician who has long eyed the top job. He is also a religious conservative who opposed the same-sex marriage bill that was eventually passed late last year.

Chen Hong, who directs the Australian Studies Centre at the East China Normal University, told Caixin that Morrison and Turnbull have similar policy positions, so there is likely to be a high degree of continuity between the two.

During his term as the country’s treasurer, which started in 2015 and ended upon his leadership bid win, Morrison has blocked several Chinese investments in Australia. That year, he rejected a Chinese consortium’s attempts to purchase cattle empire S Kidman & Co., saying it would be contrary to the national interest for it to go to a foreign buyer in its current form.

The same year, he forced foreign owners of Australian property to sell seven projects after a probe into illegal transactions. Four of the seven involved investors from the Chinese mainland, with a combined value of A$9 million ($6.5 million).

In 2016, Morrison rejected bids by two Chinese companies in the A$10 billion sale of the country’s biggest power grid, Ausgrid, due to security concerns.

The Sino-Australian relationship has deteriorated since 2016 when some local media outlets and intellectuals expressed concern about excessive Chinese influence in the nation’s politics and academia.

Professor Hendrischke, in a June report co-authored with consultancy KPMG Australia, said that sentiment has grown along with “a higher level of apprehension by Chinese investors towards investing in Australia.”

Only 35% of Chinese companies surveyed felt welcome to invest in Australia, a notable decline from 52% in 2014, according to the report.