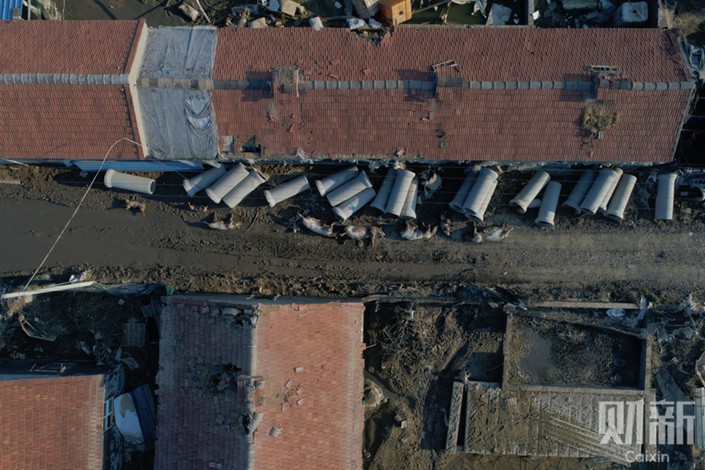 An alley in the Kouzi village of Shouguang, a town in Shangkou, was seen littered with pig carcasses on Aug. 25. Photo: Chen Weixi/Caixin

Flooding that was made worse by a rush to release water from upstream reservoirs has caused widespread devastation in the eastern province of Shandong, an area responsible for much of China’s farm produce.

The flooding, triggered by tropical storms Yagi and Rumbia earlier this month, led to 13 deaths and another three missing in the Shandong city of Weifang. About 173,500 people in the city of 9 million were displaced, according to the city government. Direct economic losses have exceeded 10 billion yuan ($1.5 billion).

In Shouguang, a county-level city within Weifang that’s known for mass production of vegetables and many other farm produce, the flood damaged two-thirds of the area’s greenhouse farms — about 110,000 facilities in a population of 1.14 million.

Shouguang, 300 miles southeast of Beijing, provides the capital with 30% of its vegetable consumption. The extensive damage has stoked fears about prices instability of staple vegetables.

The flood in normally drought-stricken Shouguang was unusual, and later the water conservancy authority in Weifang admitted to releasing large amounts of water from three reservoirs upstream within a short period of time.

Conservation authorities in drought-plagued areas tend to hold as much water in reservoirs as possible in summer to tackle droughts, and they release water only when necessary, according to Liu Shukun, an academic at the China Institute of Water Resources and Hydropower Research. But such decisions are often clouded by inaccurate weather forecast, he said.

In Shouguang, the problem wasn’t simply that the water was released from the reservoirs, but that it was that it was released simultaneously. “If water could have been discharged from each reservoir at different times, the disaster however could be avoided,” Liu said.

In Shouguang’s town of Shangkou, one of the areas hardest-hit by the flood, residents had been warned about releasing water from the reservoirs on Aug. 19. The amount of water to be released had planned to be as small as 300 cubic meters (10,600 cubic feet) per second, according to Li Huachang, a fox farmer in Shangkou.

More than 2 million animals at 591 farms in Shouguang drowned in the flood, the Shouguang Daily reported over the weekend, citing the animal husbandry authority in the city.

Gallery: Trail of Destruction Left by Flood in Shouguang in Shandong