By Jason Tan and Pei-Hua Yu 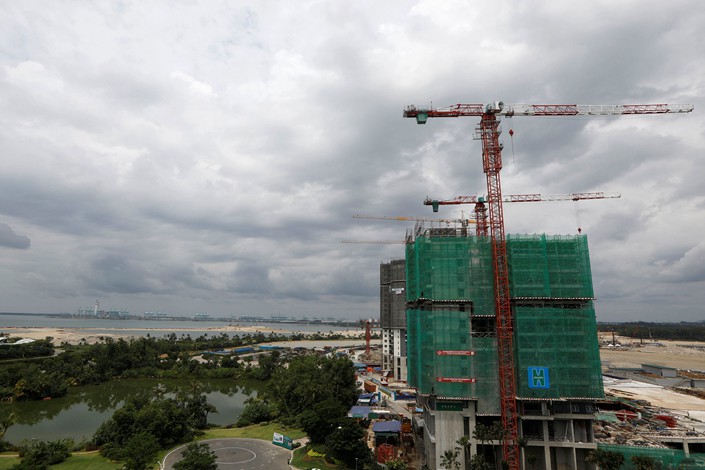 A view of the construction at Country Garden’s Forest City project in Johor Bahru, Malaysia, in February 2017. Photo: VCG

* Malaysian Prime Minister Mahathir Mohamad said that upscale Forest City project “was built for foreigners, not built for Malaysians,” and “if a lot of foreigners come in, then we lose control of our country”

The Prime Minister’s Office said Mahathir made the remarks during a news conference in the nation’s capital, Kuala Lumpur, earlier that day.

Mahathir’s comments contradict those of Country Garden Holdings Co. Ltd., developer of the sprawling project in the southern peninsular state that borders Singapore. Country Garden had told Caixin that such reports “are inaccurate.”

“One thing is certain, that city that is going to be built cannot be sold to foreigners,” Reuters quoted Mahathir as saying at noon Monday.

“We are not going to give visas for people to come and live here,” he added. “Our objection is because it was built for foreigners, not built for Malaysians. Most Malaysians are unable to buy those flats.”

A handful of China-related projects have come under scrutiny after Mahathir, 93, scored a surprise win in May, reclaiming the office he originally held from 1981 to 2003. He said hours after the win that he would renegotiate such deals with China, which he said had unfair terms, dragged the country into more debt, and would bring in an influx of immigrants.

During his state visit to China last week, Mahathir reiterated his stance on the Forest City project to Caixin in an exclusive interview.

“That particular project is a very high-value project, and it’s not meant for Malaysians; Malaysians cannot afford (it), especially the indigenous people. So these developments are to bring foreigners to stay there, but no country wants foreigners to come and stay in the country permanently,” he said.

“We are a small country. If a lot of foreigners come in, then we lose control of our country. That is why we don’t approve of that project. We will not allow foreigners to come and live in Malaysia. They can come on holiday. That’s fine. But to live in Malaysia, it is not something that we would welcome,” the leader said.

Reuters reported that Malaysians living in Johor state complained of large numbers of Chinese people snapping up properties in Forest City. They also cited concerns about environmental damage, a glut in the property market, and the impact of land reclamation on fisheries.

According to a former employee who worked in sales and marketing for Forest City, retail prices per square foot of the luxury project are double those of others in the neighborhood. That has driven many Malaysians away. The person said that more than 90% of Forest City buyers are from China.

In addition to Country Garden, other Chinese developers have tapped the property market boom in Southeast Asia’s third-largest economy, such as Agile Group Holdings Ltd., Guangzhou R&F Properties Co. Ltd. and Greenland Holdings Corp. Ltd. The majority of buyers of these developers’ properties are Chinese, too.

Country Garden has developed just a fraction of the planned reclamation of 30 square kilometers (11.6 square miles) of Forest City, which was designed to house 700,000 people.

According to Country Garden, Mahathir’s comments on Monday didn’t correspond with the conversations between him and Country Garden founder and chairman Yang Guoqiang during an Aug. 16 meeting, which took place in Kuala Lumpur.

“During the meeting, Mahathir reiterated that he welcomes foreign investments, which could create employment opportunities, promote technology transfer and innovations that could benefit Malaysia’s economic growth and job creation,” Country Garden said in a statement, quoted by Malaysian business media The Edge on Tuesday.