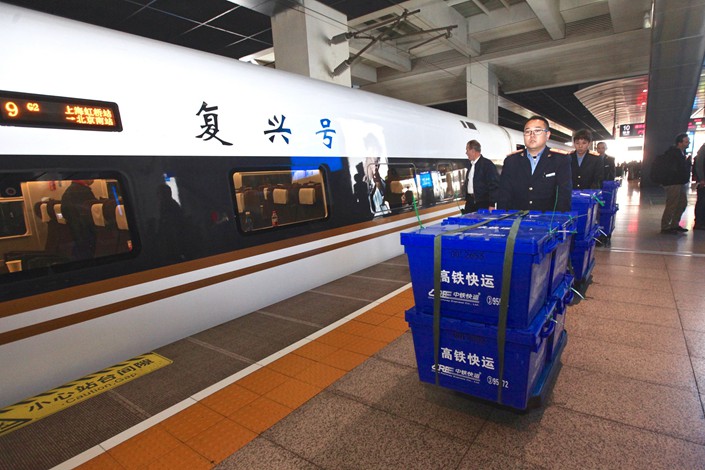 CRC’s total debt stood at 5 trillion yuan as of March, according to official figures. Photo: VCG

The Shenzhen-based venture, of which the state-owned railway operator will own 55% while SF Express will own the rest, will involve businesses that include cargo services by high-speed rail, as well as product research and design, CRC said in a statement (link in Chinese) on Wednesday.

“The establishment of the new company is one of the important achievements after CRC accelerated the ‘mixed ownership’ reform and took steps to optimize the cargo business,” CRC said in the statement, citing a company executive.

The move comes three months after CRC sold about half of its stake in its Wi-Fi unit to two private companies — automaker Zhejiang Geely Holding Group Co. Ltd. and social media giant Tencent Holdings Ltd. — for 4.3 billion yuan ($631 million). Earlier this month, the Wi-Fi company launched an open tender for the installation of Wi-Fi equipment sets on some of the CRC’s select bullet trains, the first time that the rail operator has opened such a bid to a third party.

The cooperation with SF Express — the country’s largest private courier — also highlights CRC’s effort to boost its freight volume amid massive debt accumulated after years of expansion. As of late last year, China has installed a total 127,000 kilometers (78,900 miles) of railway tracks, with high-speed lines accounting for 20%. CRC’s total debt stood at 5 trillion yuan as of March, according to official figures.

In July, CRC said it aimed to increase its annual freight volume to nearly 5 billion metric tons (5.51 billion U.S. tons) by 2020, an increase of 30% from last year’s figure.

Currently, deliveries in China are mainly handled through trucks, with railways accounting for less than 10% of the market volume.