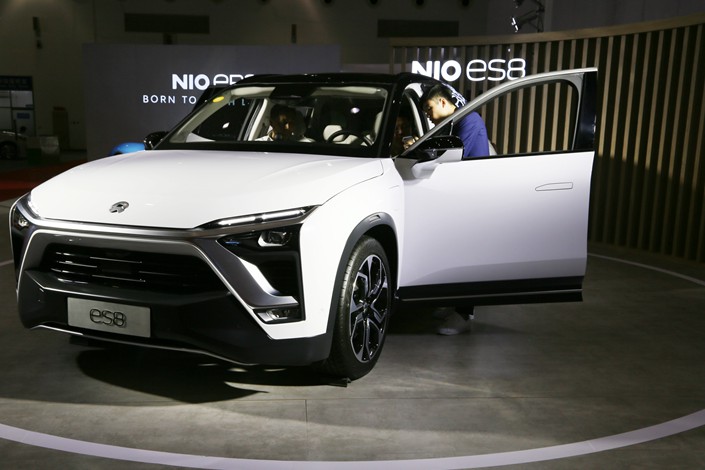 A Nio ES8 electric sports utility vehicle on display during an exhibition in Beijing on Aug. 14. Photo: IC

*Even though Nio Inc. has slashed the amount it wants to raise by $300 million, investors at the first stop on its roadshow expressed doubts over the company’s prospects

*The company delivered over 1,300 vehicles as of August, but lost some $732 million last year

Nio filed an updated prospectus to the U.S. Securities and Exchange Commission on Tuesday in which it cut the maximum amount it wants to raise to $1.5 billion, which would give it a valuation of $8.46 billion. On Wednesday, however, investors in Hong Kong questioned the carmaker’s growth prospects, capacity to ramp up production, and its general ability to survive in a fiercely competitive market.

“The company has great vision, but what it lacks is something to make it stand out — other than CEO Li Bin’s charisma,” said one portfolio manager who took part in Nio’s first stop at a Ritz-Carlton hotel in Hong Kong’s Kowloon district. The manager’s attitude mirrored that of many others, who said the money-losing company will have to confront U.S. investors’ broadly negative view of Chinese tech stocks.

Nio, which was founded by entrepreneur Li Bin in 2014, has already cut the size of its IPO from $1.8 billion to bring it in line with investor expectations, according to one Hong Kong institutional investor.

By 2017, Nio had raised nearly of 13 billion yuan ($1.90 billion) from investors that include social media giant Tencent Holdings Ltd. Last year, Nio’s net loss doubled to 5 billion yuan. It only began generating revenue in June, when it started selling its signature ES8 model, according to the IPO prospectuses.

Instead of making vehicles on its own, Nio currently relies on a partnership with China’s state-owned Anhui Jianghuai Automobile Group Co. Ltd. for production.

One Japanese institutional investor questioned this arrangement. In an interview with Caixin, he asked whether it would allow Jianghuai Automobile to master the technological know-how of the electric car business, leaving Nio as little more than a marketing and branding outfit.

As of August, the company delivered 1,381 vehicles and secured another 15,761 reservations with user deposits, the prospectus showed. On average, each batch of vehicle deliveries has been delayed by about a month, according to Li.

Nio has said it will build its own car production factory in Shanghai. Investors, however, cast doubt on its capability to do so. “Making cars is more than just putting thousands of parts together,” the Japanese investor said. “As it ramps up production, its biggest challenge will be managing the supply chain effectively without wasting parts and causing a run-up in costs.”

Nio’s IPO will make it the first among dozens of Chinese electric-car startups to tap the public market. The company’s success will be crucial for China’s fledgling electric-car market as private investors will see it as a litmus test for the industry, analysts said.