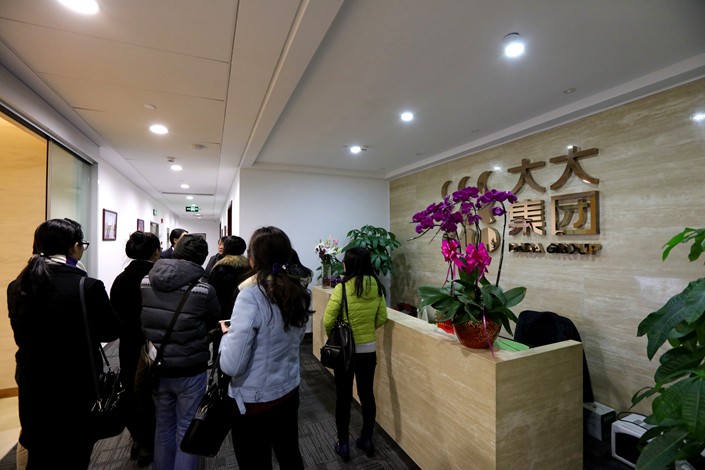 Concerned investors gather in the Shanghai headquarters of the Dada Group on Dec. 16, 2015 after it was reported the company was under investigation. Photo: IC

China’s battle against illegal fundraising and Ponzi schemes has claimed its latest scalp, with the founder of a wealth management company that duped investors into parting with 14.4 billion yuan ($2.11 billion) jailed for life and his companies fined a total of 400 million yuan.

Ma Shenke was found guilty of fraudulent fundraising, according to a verdict handed down by the Shanghai No.1 Intermediate People’s Court on Friday. His company, Dada Group, sold wealth management products through the internet without a proper banking license, and raised billions of yuan from the public to invest in projects that either didn’t exist or promised unrealistically high returns, the court said.

Another senior executive, Shan Kun, was given a 12-year prison sentence and hit with financial penalties, although the court document did not disclose the amount. The verdict said the two men “seriously disrupted the country’s financial management system.” Ten other Dada employees were given prison terms ranging from three to 11 years and undisclosed fines.

Police began investigating Shentong in late 2015, a year that saw the implosion of a string of fundraising scams. They included the infamous Ezubao, then the country’s biggest online peer-to-peer lending platform, which swindled about 900,000 investors out of more than 50 billion yuan through a Ponzi scheme promising high returns, and the Fanya Metal Exchange, a metals trading platform based in southwest China which collapsed owing investors 40 billion yuan.

Shentong was set up in July 2013 with registered capital of just 50 million yuan. The company expanded rapidly and by November 2015 it had 500 branches in 282 cities across the country. Its subsidiaries were involved in a range of businesses including wealth management, construction and training, according to its website.

Through various methods, including online sales, Shentong and Dada, its wealth management subsidiary, raised 14.4 billion yuan through the sale of wealth management products that invested in sham projects or projects whose profitability could not be guaranteed, according to the verdict. But much of the funds raised were used to repay early investors, pay staff salaries and squandered by company executives. When the police stepped in to investigate the company, they found 6.5 billion yuan was missing.

Before Shentong ran into trouble, regulators received repeated complaints that subsidiaries involved in selling private funds to investors were engaged in illegal fundraising, either because they didn't have the proper licenses or because they were selling unregistered private funds to the public without approval. They also attracted attention for the high incentives offered to sales staff — some subsidiaries promised to pay them 20% of the funds they brought in. There were also concerns about the absence of custodian services for investors’ funds, which gave Shentong the opportunity to use the money to pay incentives for employees and to invest in so-called public-service projects, according to publicly available information seen by Caixin.

Shentong's problems mounted as it couldn't finance redemptions by investors and company employees told Caixin in December 2015 that they were being forced to buy funds managed by Dada or face the sack.

The jailing of the man behind the Shentong scam is cold comfort for investors who were duped by promises of high returns. The court said that some assets have been recovered, including cash, equity stakes, property, automobiles and watches, and the recovery process is still underway. However based on the experience of similar cases, investors are unlikely to get all their money back.