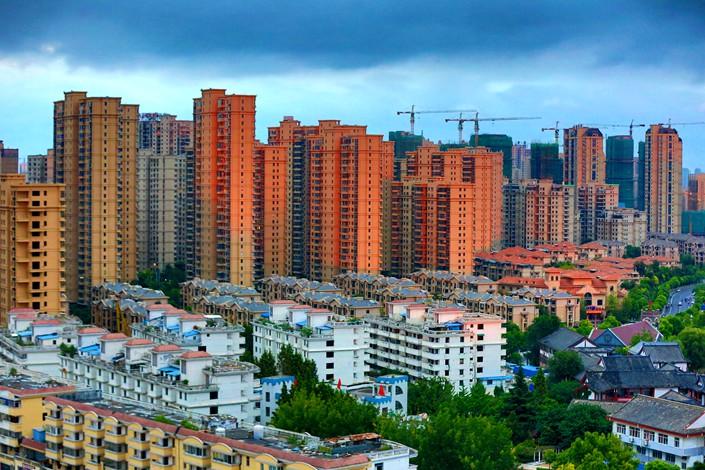 Houses under construction are seen in Huaian, Jiangsu province, on Sunday. Photo: VCG

* Concerns mount that bank loans are being funneled into risky, speculative investments in property and online lending

(Beijing) — China’s efforts to curb growth in corporate debt and rein in “shadow banking” have pushed the country’s banks to focus on boosting loans to individuals — the half-year earnings reports of listed lenders show consumer credit has been booming.

But while personal debt is surging, retail sales growth is slowing, fueling concerns that bank loans are being funneled into risky, speculative investments in property and online lending rather than being spent on consumer goods.

The Agricultural Bank of China (ABC), one of the “big four” state-owned commercial banks, reported outstanding personal consumption loans rose to 150 billion yuan ($22.0 billion) at the end of June, 9.3% higher than at the end of 2017. The growth rate for such loans, which are supposed to be used for specific spending purposes such as paying for school and travel, buying cars and refurbishing homes, was the second-highest among all types of retail loans granted by the bank, and almost one-third higher than the increase in the bank’s outstanding corporate loans.

Growth in credit card spending also jumped at China Construction Bank, another of the “big four” lenders. Outstanding balances at the end of June were 12% higher than the end of 2017 at 631 billion yuan, outperforming all other types of loans granted by the bank and dwarfing a 3.1% gain in outstanding corporate loans.

Midsize lender Citic Bank saw its outstanding unsecured online consumer loans surge by more than 24% during the period to 30.8 billion yuan, well ahead of a 1.7% rise in corporate loans and a 5.2% increase in overall personal lending. Internet consumer loans at regional lender Guangzhou Rural Commercial Bank totaled 1.2 billion yuan at the end of June, more than five times higher than at the end of 2017.

The banks’ focus on expanding consumer credit comes as their appetite for risk sees a decline due to slowing economic growth and a regulatory crackdown on higher-return, higher-risk shadow-banking activities. The government is also encouraging them to increase lending to consumers to bolster the economy as growth in fixed-asset investment slumps and a trade dispute with the U.S. casts a pall over the country’s export outlook.

But concerns have been growing that this increased consumer credit isn’t translating into spending, with official figures showing retail sales grew just 9.4% year-on-year in the first half of 2018, the weakest increase since the full year of 2003.

Some borrowers have used their credit for more risky activities such as internet financing. As Caixin reported in January, many individuals took out loans from banks to invest in Qbao, an internet wealth-management firm that imploded after being exposed as a Ponzi scheme, to profit from the interest rate gap. A 26-year-old investor told Caixin that he had applied for seven credit cards to withdraw money to invest with the company, which was based in the eastern city of Nanjing.

Others used the “kuaidai” consumer loan platform run by China Construction Bank’s branch in Nanjing to obtain funds to invest in Qbao. Zhang Xiaolei, the head of the company, turned himself over to police in December amid allegations the company was cheating customers. He was later accused of illegally raising 70 billion yuan, in what could turn out to be the largest online investment fraud in China’s history.

The misuse of consumer loans has raised alarm bells with the financial regulators, who have stepped up scrutiny of the business since September 2017.

An executive with the Postal Savings Bank in the southern city of Shenzhen, who declined to be named, told Caixin on Tuesday that regulators are continuing to keep watch over the use of consumer credit and will order banks to call in loans if they find any wrongdoing.

A senior manager with China Merchants Bank, a listed joint-stock bank based in Shenzhen, warned that consumer credit risks could “gradually show up this year,” pointing to signs of danger such as rising bad-loan ratios in the bank’s credit card lending business.

Nonetheless, the China Banking and Insurance Regulatory Commission, in a statement (link in Chinese) last month, renewed a call for banks to grow their consumer credit business to “meet people’s demand for funds to spend on goods and services such as tourism, education, health care and elderly care,” as part of the regulator’s efforts to improve financial support for the economy.