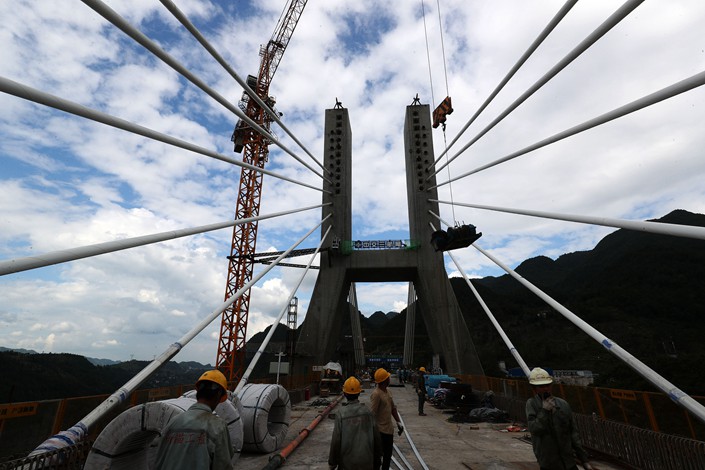 Banks that underwrite local government bond sales will no longer face restrictions on the amount of the debt they can buy themselves, the latest move by policy makers to help cash-strapped authorities raise funds for infrastructure investment to support flagging economic growth.

Lenders were previously only allowed to buy up to 20% of any local government bonds issued by their underwriting departments, a ceiling imposed in 2012 out of concern that the trading and investment arms of banks were mopping up unwanted bonds to ensure the success of the sale, but at the same time exposing their balance sheets to additional risk.

But the China Banking and Insurance Regulatory Commission (CBIRC) has now scrapped the 20% ceiling, according to a circular that was seen by Caixin on Monday. Banks will now be able to buy up any portion of a bond sale that has not been fully subscribed, reducing the risk that local governments will fail to get all the money they want to raise. The move is being seen as another effort to spur banks to buy more local government bonds as a deluge of issuances is set to hit the market after the Ministry of Finance last month ordered officials to speed up sales.

The decision comes days after reports surfaced that the regulator planned to reduce the risk weighting of banks’ local government bond holdings to zero from the current 20%, putting them on the same level as Chinese government bonds (CGB) issued by the Ministry of Finance. The cut would make it more attractive for banks to buy the debt because it won’t affect their capital adequacy ratio (CAR), a key measure of a lender’s ability to absorb potential losses and protect depositors.

However, no documents have been circulated yet to notify banks of a cut. Some bond market specialists have told Caixin that the issue is highly controversial and that for the time being there’s unlikely to be any change.

Regulators have been scrambling to find ways to boost demand for local government bonds, particularly among banks, which are the biggest buyers of the debt and have the most money available to spend. There’s been a heightened sense of urgency since the State Council said in July that it would push forward spending on infrastructure projects financed by special-purpose local government bonds to help support economic growth. These bonds were introduced in 2015 to support key investment projects and must be repaid from income generated by those projects rather than from general fiscal revenue.

This year’s quota for issuance of new special-purpose bonds was set at 1.35 trillion yuan ($197.62 billion), a 69% jump over 2017, but local governments have been dragging their feet on sales. Ministry of Finance data show that as of the end of July, only 563 billion yuan of such debt had been sold, a figure that includes issuance of new bonds and refinancing bonds. The ministry issued an order on Aug. 14 that 80% of their quotas must be used up by the end of September and most of the rest by the end of October.

The removal of the purchase cap is reasonable, some bankers involved in local government debt issuance told Caixin, because local government bonds are very similar to CGBs and bonds issued by policy banks and should be classified as quasi-national debt. They carry higher credit ratings and have no risk of default, they said.

Some of China’s biggest state-owned commercial banks have pledged to buy more local government bonds, according to statements in their recent half-year earnings reports. China Construction Bank Corp. said that it has already increased its holdings of local government bonds, and will buy more as it sees fit over the next half-year. Bank of China Ltd. and Bank of Communications Co. Ltd. have also promised to boost purchases.