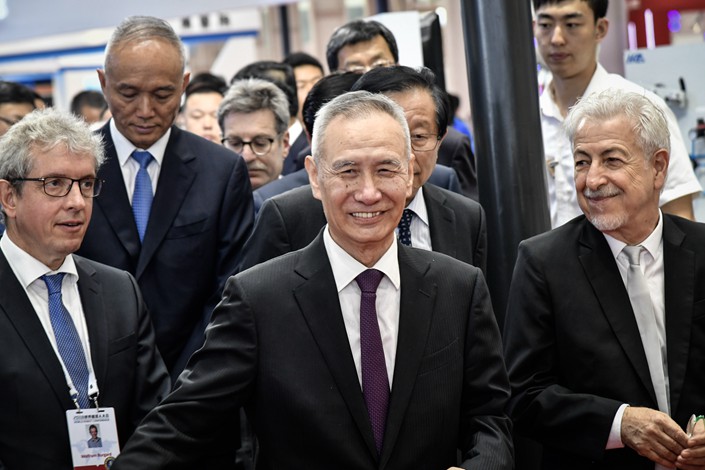 Liu He (center), one of the four vice premiers of the State Council, attends the World Robot Conference in Beijing on Aug. 15. Photo: IC

Vice Premier Liu He called for the government to focus more on providing assistance and less on planning for China’s high-tech sector, as the nation seeks to lessen its reliance on imported products.

The comments came in a government report published Wednesday after the first meeting of a new central technology group under the leadership of Liu, one of China’s top economic strategists. The report cited “profound changes in the external environment” — a reference to growing Western resistance to selling sophisticated technology to China.

A major catalyst behind the central government’s actions has come from the recent trade war with the U.S., which has blocked a number of major acquisitions of American technology firms by Chinese buyers. The U.S. has accused China of intellectual property theft and other unfair trade practices, and levied billions of dollars in tariffs to try to force the country to change its ways.

China’s reliance on imported technology came into focus in April, when telecom-equipment maker ZTE Corp. was nearly forced out of business after the U.S. banned the company from buying American chips and other technology as punishment for violating U.S. sanctions.

The latest meeting headed by Liu stressed the urgency of transforming the government’s role in fostering technology development, saying it needed to focus less on making decisions and more on providing better assistance. Rather than provide money and goods and choose projects, it should focus on “making policies, creating environments and providing better services,” the report said.

The meeting reaffirmed the “determining role technological innovation will play in the country’s national power and global competitiveness,” according to the report.

Technological development has been a major focus for China since President Xi Jinping came to power in 2012.